Omen of the Crows 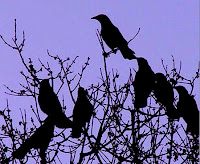 If one is of a superstitious nature like many a Roman, then one has beliefs governed by luck. A woman combing her hair with the spear of a dead man gives good luck; the left-side creates extremely bad luck. Most of all, crows bring terrible bad luck and are ultimately a curséd omen. Take this famous example: Sejanus the rebel had been warned of his impending doom by the crows perched on a prison roof that he was later taken to and executed at for his base treachery. But why should he have been so surprised by this when the crows had surrounded him? If only our good friend Sestillius had heeded the same warning before it was too late for him. The consequence of this has left me, Revocatus, to pen his tale for him.

It was little more than a week ago when my excellent companion, Argus, and I were to attend a most exquisite banquet that Sestillius had planned to put on, courtesy of his slaves of course; in celebration of his having another estate added to his collection.

When we arrived, well, what a surprise met us. Instead of being greeted by the slave-porter as is custom, the door was answered by none other than Sestillius’s wife Fortunata who then proceeded to tell us that she was exceedingly sorry that the banquet was off for Sestillius was dead! No sooner than we had received word of his successful bargaining had he apparently dropped down dead from a heart attack. She shed numerous tears while telling us all of this of and while I could at first only think of the rudeness for not having informed us immediately; Argus later imparted some wise words to me and Fortunata appeared considerably cheered up when telling us that Sestillius would be cremated the next night though he had wished for burial.

I frowned, musing over his words. “Are you proposing that the death of Sestillius was not in fact an accident? But something of a far more devious nature? A woman who has murdered her husband must be justly punished by the gods.”

Upon this, I left with Argus as soon as the Laqueatores triumphed over their opponents although the battle wasn’t quite as bloody as I was expecting. This is just as well perhaps as my mind was already concocting a murderous, most disgusting scene of Sestillius left to rot in a grave without the correct rituals made; the slaves sworn to secrecy. We made our way back to that wonderful abode at night hoping that we could enter the mausoleum undisturbed by Fortunata.

Thankfully, Fortunata was not there. Men can be blinded by love as well their own faults for Sestillius to have liked Fortunata. By the entrance, we came across a young Egyptian slave, trembling as he stood before us, refusing us admission since he was on the orders of his mistress (and no doubt she was his mistress).

“Should I box your ears?” cried Argus. “Have you not been taught respect for your social superiors? Insolent dog! Stand aside you filthy cur ere I chop off your ears and throw them to the gladiatorial crocodiles!”

Fearing that his wroth would attract attention, I spoke quickly: “Slave, we wish for admission inside the mausoleum. You do not want to upset my friend for he is a retired gladiator of notorious skill and as you can see, he has not lost his wits. You need not impart this information to your mistress. Say you were overpowered if you must say anything at all.”

I suppose I cannot truly appreciate the position of a slave since I have been fortunate enough to have never been one. But our words certainly had the appropriate effect for the Egyptian stood aside and sank to the floor cowering in case his face invoked anger again for Argus.

The inside of the mausoleum was lit by many burning torches which illuminated the flowers, the trees, the cisterns, it seemed less of a resting place for the dead and more of a place for recreation. There on the bier at the end of the glorious tomb rested Sestillius, robed and decorated, looking quite healthy for someone gripped by death apart from pallid skin. We approached the body and were relieved to discover that no brute force had been used upon it. Though a man is naturally stronger than a woman; a man can be easily overpowered when under the strong influence of alcohol. No such signs of weaponry had been used on Sestillius.

Suddenly, we both heard a tumultuous racket outside and we fearfully looked at each other. Had our presence been discovered? Had the foolish slave blabbed? We heard a flurry of footsteps coming our way through that maze of a tomb suggesting that a company was coming to seize us. Without much further thought, I grabbed Argus and taking advantage of the mini-forest planted here; we hid amongst its branches and kept our breathing to a minimum.

A number of guards; the ones previously belonging to Sestillius I noted, surrounded the bier and scanned their surroundings looking for the intruders and there stood Fortunata wearing a gleaming ring that seemed rather familiar. Her countenance was frightening and we dared not move. Part of her tunic seemed splattered with ink and in one hand did she clutch a rolled-up scroll. Finally, after what seemed like a century, the guards shuffled off upon the orders of Fortunata and presently left us alone.
We climbed down and noticed that Sestillius had been disturbed by the guards as if hoping to catch one of us hiding beside him. His eyes were now open and I could not help but shudder at this sight as I saw that the pupils were widely dilated as if he had taken some sort of drug. Or…

“Belladonna,” I murmured. “Poison is a woman’s weapon.” Argus looked at me intrigued. “It is easy to conceal part of the plant inside of a meal and his death could be attributed to natural causes. Do you remember Socrates and the hemlock?”

Argus contemplated this and nodded. “But we need further proof. This sort of method takes time; what if he wrote a letter?”

“Are you suggesting that we should break into the house?” I cried. “That is madness!”

But my words were to have little effect and as we left, I saw that the slave had gone. We knew where Sestillius’s room was and we went towards it though we had to scale the wall and slip in through the window. Thankfully, Fortunata was not there. On the table we saw another scroll. This we examined:
‘I should be most pleased upon my latest success as the gods have granted me and yet in myself, I feel less than joyous. The conditions of confusion, convulsions and constipation afflict me even now. Have my enemies reached me at last? I should have heeded the crows’ warnings. I praise my Christian God that I have seen the light, having left behind the paganism of Rome. Having written this, I know that they shall come for me very soon for having broken Roman law and yet…’

There the letter ended in little more than a scrawl. He was certainly describing the symptoms of belladonna and it seemed that Sestillius had been hiding a great secret; one that would shock the whole community and especially his rich companions. Having deciphered the cause of his death, we tried to gather our thoughts together when Fortunata stepped in…

The truth, it seems, has been uncovered. After demanding information from her, Fortunata eventually confessed that it was she who had fed her husband the poison Belladonna, arguing that it was a kinder death than the one that the Senate would give him. Perhaps so, but Sestillius would have broken his own ring and not have given it away to his wife for fear of fraudulent activities which Fortunata was prepared to undertake. The other scroll we found to be Sestillius’s will and she had planned to divert the money to herself rather than the original recipients that he had intended, his cousin I think.

We have done our part now and it is up to the courts to decide the fate of the murderess. Though our friend was taken from us untimely, we can be assured that he had had a good life and he is indeed free of all the perils that life has to offer and that we, of the living must yet suffer those perils still.


This superb short-story by 17-year-old Claire Worthington from Blackburn College, won second prize in the over 14 category of the 2011 Golden Sponge-stick Competition. Well done, Claire!
Posted by Caroline Lawrence at 8:44 PM