Alf Doten was 19 when gold was discovered at Sutter's Mill in California. He sailed from Plymoth to California to seek his fortune. He spent the next two decades trying to strike gold (or silver) in California and Nevada. Finally in 1864 he went to join the staff of a newspaper in Virginia City Nevada. He overlapped another prospector-turned-Virginia-City-newspaperman by only a few months. That man was Sam Clemens, who had just started to write under the pen name, Mark Twain. 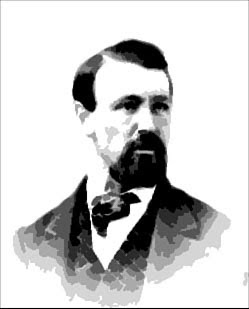 Alf Doten was not as witty or successful as Mark Twain, but he kept detailed journals of his experiences from the day he stepped onto the ship bound for San Francisco until the day he died, in 1909. He left 79 leather-bound journals, with entries in pencil. In 1973, the respected scholar and author of The Ox-Bow Incident, Walter van Tilburg Clark, published The Journals of Alfred Doten in three huge volumes. They offer fascinating glimpses in to the daily life in the American West in the second half of the 19th century.

Here for example, are some of his entries from December 1864, his first Christmas in Virginia City.

above: Alf Doten in 1866, two years after he wrote the entry below

Dec 22 - Clear and pleasant - Went up to Morton's to Forefather's dinner - some 10 or 12 sat at table - chicken roasted, succotash, pies, cakes etc, cider, wine &c - I took a bottle of that champagne along that I stole from the office - jolly time... at 6 1/2 ocl'k went to Consolidation meeting & reported it... in the evening I attended the Ladies Fair for the benefit of the Sisters of Charity...

Dec 24 - Stormy - blustery with light sprinkles of rain occasionally - Christmas eve - after got through work about 11 oclock our boys all pitched into the egg-nog, two pitchers full of which were sent into us by the saloons - sang songs & had a jolly time - drank it all up & then started out - got all the Enterprise boys out - some 15 or 20 of us in all - Dan De Quille also along - visited all the saloons - free drink with all of them - printers on the rampage - went down to Chinatown and kicked up thunder - came back - at 4 oclock Dan & I made out to get clear from the crowd & home to our beds. - 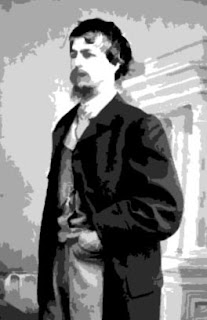 Sunday, Dec 25 - The same - blew like the devil all day - stripped several roofs of tin - blew down buildings and did much damage - Light rain most of the day - rose at 11 - turkey, pudding etc at Mrs Dill's - went up to Morton's dined there also - chicken, pudding, succotash, etc - Evening we attended Sabbath school Festival at St Pauls Church - went from there to Music Hall - then to Great Republic - I slept with Sutterly [sic] at his room -

Clem Sutterley (pictured) was a photographer and friend of Alf Doten

Dec 27 ... Was down with Higbee to visit Jessie Lester who was shot last Sunday night - had to have her right arm amputated at the shoulder joint this afternoon - poor creature, she was just recovering from the taking of chloroform during the operation, and was shrieking with pain - and in her delirium, calling on her mother...