What is Cowboy Poetry?


I'm in the lobby of La Quinta Inn in Newhall, California, waiting for a shuttle to take me to Melody Ranch open weekend - research for my new Western Mysteries - and I am suddenly surrounded by cowboy poets. Fair enough: the official name of the Melody Ranch and Movie Studio Open Weekend is the Santa Clarita Cowboy Poetry and Music Festival.

So I ask a lady sitting nearby, "What is Cowboy Poetry?"

She is Yvonne Hollenbeck, entertainer, author and 'Cowgirl Poet of the Year'. (http://www.cowboypoetry.com)

"Well," she says, "cowboy poetry talks about cowdogs, horses, the western way of life, in poetry."

"And without the country," says Andy Nelson, who is sitting behind her. He is a cowboy poet who has the 'Clear Out West' radio show and has written a book called Riding With Jim.

"We like to think our poetry can stand on its own", says Yvonne. "Some times the best song is a bad poem set to music. I'm quoting Sting," she adds. 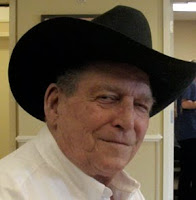 On my left is Pat Richardson. He writes poetry, does his own illustrations and is a popular performer on the cowboy poetry circuit, along with Yvonne and Andy. He gives me a signed copy of his book Unhobbled.

I flip through the book and my eye falls on a poem called 'Pony Eggs'. Apparently when Pat was a little boy, longing for his own horse, his dad told him coconuts were pony eggs. "You'll notice they got hair and fur on them, and when they hatch out there'll be a pony in each one!" The poem tells how Pat got his 'revenge' many years later.

Another poem called Five Card Draw has this verse:

One night Ben had a full house,
Bet his saddle, spurs an' rope;
Zeke giggled at his foolishness
and raised three bars of soap.

That poem goes on for stanzas until a humorous and bloody ending.

According to Wikipedia, Cowboy Poetry was told around the campfire, with humor, rhyme and tall tales. I think of Mark Twain, and the tall tales that got him into such trouble in Virginia City.

What is surprising to me as I attend the Cowboy Festival is how popular Cowboy Poetry still is. Probably because in America ranching is still a major industry.

Later that day Richard and I are sitting in a sold out tent of maybe 700 people. Every third head in this place wears a cowboy hat. And most are real cowboy hats. We are all watching a white-mustached guy called Dave Stamey who is obviously a huge star on the cowboy poetry circuit. And deservedly. He is like a singing Sam Elliott: a brilliant musician whom everybody loves. Just outside the seating area, I see two young women gazing at him adoringly and mouthing the words of his songs, including "I'm not old, I just been used rough..." Wow. Imagine having groupies when you're in your 50's and not even Mick Jagger!

I'm sitting next to a woman from New Mexico. She tells me her husband wanted to come but it was his busy season and he had to visit some ranches.

Above the sound of the music it sounds like she says: "He shoots horses."

"Ah," I say. But already I am thinking: There's got to be a cowboy poem in that.

.
Posted by Caroline Lawrence at 4:52 PM