"The past is a foreign country; they do things differently there."

Only a century and a half ago things were very different in America. If you go to a museum or a restored shop like the excellent Village Store in Woodside, California (right) you'll find lots of mysterious objects. Would you recognise a carpet-beater, a butter pat, a washboard or a button-hook? Probably not, but your great great grandmother might have used these objects every day. Would you know what to do with a bullet-mould, a powder horn, hard tack or a dipper? Your great, great grandfather would have! 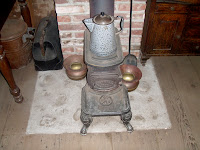 One of the strangest artifacts you might see is a small copper or earthenware basin on the floor. Some of these are chamber pots (portable toilets) but the brass ones (and the ceramic ones with a funnel-type hole in the tops) are spittoons.

What is a spittoon?

In the 19th century, chewing tobacco was extremely popular in America. Instead of smoking tobacco in a pipe (fiddly), lighting up a cigar (expensive) or rolling a cigarette (effeminate) lots of westerners chewed tobacco.

It was sold in bricks or twists (right) and some stores had a chopper so you could order as much or as little as you wanted. 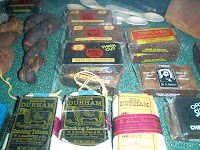 To get a nicotine buzz you would place a small amount of tobacco in your mouth between gum and cheek and let it stew. Although it's called "chewing tobacco" you don't necessarily have to chew it. The drug in the tobacco leaf gets into your blood system from just having the chaw in your mouth. It made you salivate but you didn't swallow or you would be sick. After you had the piece of tobacco in your mouth for a few minutes, you would spit it out, along with the yellow brown saliva.

In the 1800's, there were spittoons in almost every public place. Men would spit into them - sometimes missing and hitting the floor or wall around them. My mother remembers the smell of Bakersfield City Hall in the 1940's where there were still spittoons. She says the smell was rank and revolting. She also remembers when some private houses had spittoons. One hostess used to put paper on the walls and floor around the spittoon in case the spitters missed!

When a spittoon was full of smelly yellow-brown spit, some unfortunate person would have to take it outside to empty it. Some spittoons had a hole in the side for pouring out the accumulated spit. Others had the simple hole at the top. You poured it out the same way you poured it in. 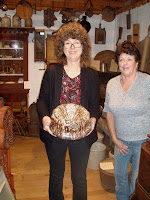 At the Mark Twain exhibition at the Museum in Angel Camp, Calaveras County, I spotted a famous type of spittoon. This is large and made of glazed brown ceramic. It has a funnel-shaped hole on top. But it also has a triangular hole at the side for pouring out the spit. This is the same type of spittoon archaeologists found in Virginia City underneath Piper's Saloon. I showed it to the woman who was working at the museum that afternoon. She didn't realise it was a spittoon even though her boyfriend has been chewing tobacco since he was fourteen. He doesn't use a spittoon. If he's outside, he just spits on the ground. If he's inside, he uses a coffee cup. Ew.

When I did a bit more research, I found out that over FOUR MILLION American teenagers chew tobacco today. Yes, today. In the 21st century. Many of them think it's less dangerous than smoking but as this excellent article tells, it's not. Chewing tobacco can give you sores, tumors, and even cancer.