My name is Caroline Lawrence and I am a teacher turned historical author. My best-known series of books are The Roman Mysteries. In the second book of that series, The Secrets of Vesuvius, a Roman girl named Flavia Gemina and her three friends are playing on the beach of their home town Ostia when they spot a man in trouble out at sea. They combine efforts to rescue him from drowning. When they get him safely to shore, clever Flavia deduces that he is the famous author and naturalist, Pliny the Elder. She is correct and the polymath gratefully promises to reward them over lunch the following day at his seaside villa a few miles south. Here's a passage from the book:

It was only a few miles from Ostia to Laurentum, a pleasant drive along the coastal road. The carriage crunched up the gravel drive of Pliny's seaside villa less than half an hour after they had left Ostia. A door-slave in a red tunic met them on the steps of the butter-coloured villa and led them through cool rooms and sunny courtyards to a breezy dining room.

Flavia and her friends gazed around in amazement.

The room they stood in was surrounded on three sides by water. Only a low wall and spiral columns separated them from the blue Mediterranean. Jonathan and Lupus immediately went to the marble parapet and leaned over.

'Careful!' wheezed Admiral Pliny, shuffling into the room. 'We're right above the sea.'

(from The Secrets of Vesuvius page 17)

In book five of the Roman Mysteries, The Dolphins of Laurentum, Flavia and her friends return to this villa following the eruption of Vesuvius. This time they meet Pliny the Younger, who is only seventeen years old at the time. I assume he has inherited the villa from his uncle, who sadly died in the eruption of Vesuvius. The children's adventures include diving for sunken treasure and encounters with dolphins.

Pliny the Elder and Pliny the Younger were both real people. We know that the younger Pliny had a lovely seaside villa in Laurentum which he called his 'Laurentine'.  He writes about it in loving detail to his friend Gallus. (Epistulae 2.17) The letter is so detailed that many architects and historians have tried to come up with a plan of his mansion. Below is the plan my husband and I put together based on a close reading of Pliny's letter... and our imaginations. 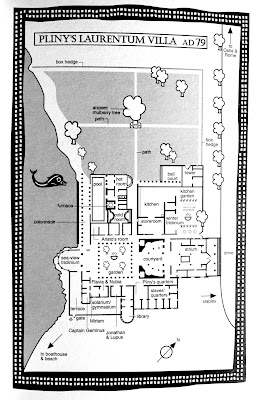 While I was still planning book five, the one set at Laurentum, I was invited to the Bologna Book Fair. It was the perfect opportunity to take few extra days to travel to Ostia to do some research. Pliny's Laurentine villa is only a few miles away. I didn't want to hire a car, but I could take public transport. But in those pre-smartphone days it was tricky to find. Here is my original account:

It is a mild spring day in mid-April of 2002. Although rain had been forecast all week, so far I have been blessed with beautiful spring weather. I catch the 3pm train from Ostia Antica and arrive at Cristoforo Colombo just ten minutes later.

Gratefully, I leave Via Cristoforo Colombo and go past the barrier into  a peaceful nature reserve. A sign informs me that I am in the Pineta Castel Fusano (Pine Woods of Castle Fusano). I am surrounded by whispering umbrella pines and oak trees. Although it is a Saturday afternoon, the place is almost deserted. Only a few elderly couples stroll, some kids on micro-scooters, one or two young people on bikes. This road is now called the Viale della Villa di Plinio (Villa of Pliny Road). It runs along the course of the ancient Via Severiana. Although Septimius Severus - the Emperor who built the Via Severiana - lived about a century after Flavia, an earlier version of this road almost certainly existed in the time of my books.

The reserve is pancake flat, perfect for walking. There are picnic tables in the shade of the umbrella pines and even a drinking fountain. I stroll between pine trees, hawthorns, myrtle, oaks and poplars.

In a clearing near a crossroads, I spot some ruins marked by a modern brick arch. These are certainly the remains of a large house, but did it belong to Pliny? I can see traces of a large colonnaded central garden and rooms on the side. The baths are where you would expect them to be. But there is no sign of the famous sea-view triclinium. or Pliny's later additions like the annex to which he retreated during the mid-winter Saturnalia festival while the slaves had parties in the main house. No ball court, and certainly no heated swimming pool... The bath complex does have wonderful black and white mosaics like those you can still see in Ostia, but these are more commonly from a slightly later period. I spot tritons (half man, half fish), seahorses, dolphins and a wonderful crayfish.

(A few years later, while watching the TV episode based on my book, I wonder if set designer Jason Carlin saw photos of the modern arch and used it for his design.)

Back in 2002, I pretend to be Flavia and take a few steps towards the place where the sea-view triclinium would have been. The coast is now about half a mile away and I find only a forest glade. Is that a fence beyond? Yes. Pushing through a hole in it I find myself on a traffic-free road called the Via dei Transatlantici.

As I take notes, the afternoon sky grows dark. There is an ominous rumble of thunder and some rain spatters down onto my notebook. The drops are blood red. Later, my friend Barbara Cooper tells me that this red rain is due to dust from the Sahara desert which has been blown over Italy. But ancient Romans would certainly have taken this as a bad omen.

The rain soon stops and I walk towards the sea. At the place where the Via dei Transatlantici meets the Via Litoriana I come upon a sign telling me I am leaving the nature reserve. There is a list of some of the animals still found in this parkland: cinghiale (boar), tasso (badger), donnola (weasel), puzzola (polecat), martora (marten), volpe (wolf), istrice (porcupine), scoiattolo (squirrel), and lepre (hare).

Presently I reach the Lungomare Amerigo Vespucci, the present coastal road. Now I know where I am. I can easily find my way back to Cristoforo Colombo train station. But before returning I decide to have a restorative snack at one of the beachfront cafeterias.

A few minutes later as I sip Coke, munch peanuts and gaze at the sea, I decide it is unlikely that the villa I just visited belonged to a Pliny. But my jaunt helped me learn about the flora and fauna of the area, and gave me the good idea of using ominous red rain!

Later, I discovered that other archaeologists came to the same conclusion that I did. Excavated in the 1930's, this villa has five different levels of rebuilding and occupation with the earliest during Flavia's time. Although it is like Pliny's villa it almost certainly not his. Some now call it the Villa della Palombara after the wood pigeons (Columba palumbus) that used to roost in a large oak tree nearby.

If you decide to visit on foot, I suggest the blue-dotted route below. The first few photos show landmarks on the route from the station to the entrance of the park. However your up-to-date device may tell you otherwise.

You can read the entire archaeological report HERE. It's in Italian but has a good introductory paragraph in English and some great diagrams and photos.

You can read my book The Dolphins of Laurentum in hardback, paperback or ebook formats. And you can buy the complete Roman Mysteries TV series on DVD HERE.
NB: At the time of writing this, February 2021, the Official Site says that the villa is closed to the public (presumably fenced off) unless you reserve a place to go with a group of 30 or more. If this is not possible, you should still be able to catch a glimpse of the villa. And at the very least you will get a feel for the trees, animals and atmosphere of the region where Pliny the Younger enjoyed his Laurentine Villa. Buon viaggio!
Posted by Caroline Lawrence at 11:19 AM