The story is so familiar to us that we forget how bizarre it is.

The Greek hero Odysseus is on his way home from the Trojan War. He has been warned that the Island of the Sirens is deadly to sailors. No man can hear their beautiful music - their 'siren song' - without wanting to go to them. But their island is ringed with deadly rocks and all who try to reach them are shipwrecked and drowned.

Clever Odysseus thinks of a way to hear their song and not die. He tells his sailors to tie him to the mast. 'No matter how much I struggle and beg,' he says, 'don't untie me until the Island of the Sirens is beyond the horizon.' He then tells the sailors to plug their ears with wax and row for all they are worth.

They do. Odysseus, tied to the mast, hears the song of the Sirens. It is so beautiful that he forgets everything he did and everything he wants. He doesn't care if he dies, if only he can be with them a few moments more, surrounded by that beautiful music. He struggles and shouts and rages at his sailors: 'Untie me! Let me go!' But they stare resolutely ahead, pulling on their oars, their heads filled with the sound of their own deep breaths and their hearts pumping. The Sirens are enraged. Why is this ship full of men not falling into their trap? They rise up off their deadly rocks and flap closer to see, for they are monsters: birds with the heads of women. 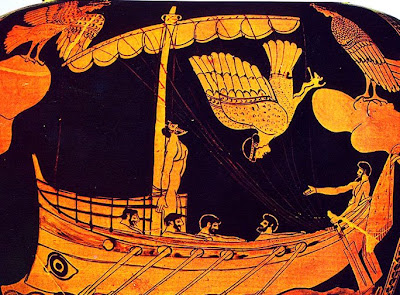 They fly as close as they dare to the boat, making their song as beautiful as possible. Odysseus writhes in the ecstasy of their song and the agony of his bondage. The sailors see these terrible creatures and pull harder on their oars. Waterhouse has shown them with bandages around their ears to double the effectiveness of the wax.

Finally they will escape and Odysseus will claim that he was the only man who heard the Sirens' song and lived. 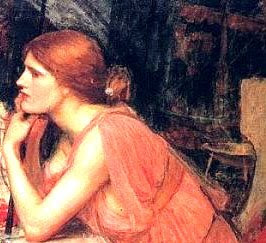 Waterhouse has chosen to show the Sirens as bird-headed monsters. He almost certainly got this idea from the famous red-figure vase (above) showing Odysseus and the bird-woman Sirens. We know he knew this vase because he puts it on a tapestry - reversed - in one of his paintings of the enchantress Circe (left). You can see it behind her head: quite murky, but recognizable if you know the vase.

Some say the Island of the Sirens is Capri, the beautiful island off the Amalfi Coast on the Bay of Naples. The Bay of Naples is one of the most beautiful places in the world and I have chosen to set two books near there: The Pirates of Pompeii and The Sirens of Surrentum. In the second book the seductive patron Pollius Felix describes the struggles of bound Odysseus as ecstatic.

J.W.Waterhouse: The Modern Pre-Raphaelite was on at the Royal Academy in 2009 but has now FINISHED. For more Waterhouse check out my blogs on Adonis, Ariadne, Circe, Hylas, Narcissus, Odysseus and Orpheus.
Posted by Caroline Lawrence at 2:03 PM