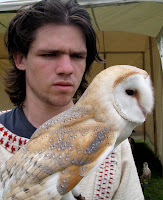 I've just spent the weekend in Wales at a Roman site called Caerleon. Known as 'King Arthur's Mount' it is the site of a Flavian fort and amphitheatre. (Flavian means it was built during the reign of the three Flavian emperors: Vespasian, Titus and Domitian). The fort was probably started about AD 75 as part of the Roman conquest of Britannia. In addition to the amphitheatre, which lay just outside the fort walls, there are remains of barracks, a giant smithy and a bath house. Excavator Peter Guest says it's an archaeologist's dream because nobody has built over the fort since Roman times. The fields have mainly been used as rugby pitches.

Anyway, the annual Military Spectacular put on by the National Legionary Museum of Wales was held last weekend (11 & 12 July 2009). As well as the fabulous Ermine Street Guard (more on that in another blog) there were falconers, like young Aaron (above left), two Roman doctors and the most famous Romano British cook in Britain: Sally Grainger. 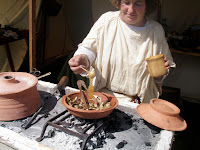 My old friend Sally does all her Roman cooking on proper Roman hearths with coals and everything. She uses ancient recipes, especially those of Apicius, and has been on TV documentaries. She is probably one of the most accurate 'Roman' cooks in the world. Helped by her faithful partner Chris, she made a delicious patina of mushrooms, leeks, lovage, eggs, liquamen and honey. Here she is adding the honey. 'Patina' was the name for the pot as well as the dish (like casserole). The dish was what you see and the result was a kind of crustless quiche. In my books, Alma often cooks Flavia and her friends a nice patina. (Come to think of it, Alma is a lot like Sally!) She let me try her mushroom and leek patina. It was delicious.

I also met someone new: Roger Morgan AKA Gaius Festus Severus, a Roman doctor or 'medicus'. Like Doctor Mordecai in my books, he believes a doctor should bleed only in certain circumstances, not as a panacea. In the film clip below, Festus demonstrates how bleeding is done on a boy who seems to have a swollen hand. (The 'swollen hand' was actually one of those big foam hands with the thumb out so you can do a giant thumbs-up or thumbs-down, but I didn't want to spoil the doctor's fun)

Festus also showed me how trepanning is done. Trepanning is when you remove a circular piece of the skull to relieve pressure after a concussion. As Festus explained, it is known from neolithic times. I found his demonstration absolutely fascinating.
Posted by Caroline Lawrence at 7:07 AM