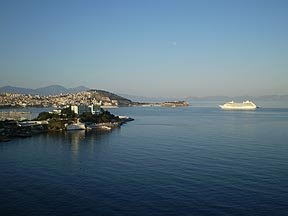 It’s our last day in Turkey - and my birthday! - and we are enjoying a day off after a grueling schedule of ancient sites. We have been upgraded to the five-star Korumar Hotel overlooking the bay of Kusadasi. Once Kusadasi was a collection of little white houses on a brown hillside overlooking a blue harbour. Now it’s a major centre of tourism, with luxury hotels stretching out along the coast on either side. In the tourist season, between May and October, it is visited by up to seven massive cruise liners every day. They come in at dawn, disgorge tourists on coaches to Ephesus then depart in the late afternoon. A few months ago one got stuck in the harbour and it took the efforts of several hard-working tug-boats to dislodge it. Just as well it wasn’t high season. 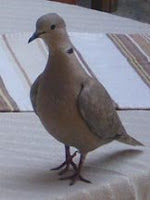 Originally I had intended hiring a taxi to retrace Flavia’s route from Halicarnassus to Ephesus, but I am just too tired. Instead I go into town early to take some photos. I get a nice one of a collared dove at an old caravanserai, now a hotel. But it’s too early and only a few shops are open. There are even fewer tourists about, making me easy prey. ‘Hello, Lady,’ say the shopkeepers. ‘Where you from?’ ‘You alone?’ ‘You want jewelry? Turkish delight? Minaret?’

I smile and try to politely rebuff them but they have answers for everything. They employ a very sophisticated blend of ironic honesty and humour, and they capitalize on the British hatred of being impolite.

Shopkeeper 6: ‘Hello, Lady. You from ship? Hello! Lady! LADY! Why are you being rude to ignore me?’

At least they are not as bad as the Egyptian shopkeepers, who physically grab hold of you and practically wrench the wallet from your hands.

I return to the hotel for their wonderful buffet breakfast and have yogurt with honeycomb so fresh that you can eat every bit of it. 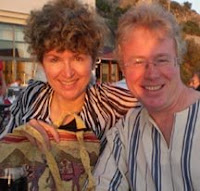 Later Richard and I go back into the old part and he does some water colour sketches as an excuse to sit and have a Turkish coffee (before noon) or an Efes Bira (after noon). Kusadasi is still pretty empty. The six massive cruise boats must have sent all their passengers to Ephesus today. We buy Richard a couple of shirts made from Denizli cotton and I get a small shoulder bag with camels on it.

We walk up to the fort on Pigeon Island and find most of the people from our tour have had the same idea. In the fort there is a crafts market and the skeleton of a whale that once beached itself here. 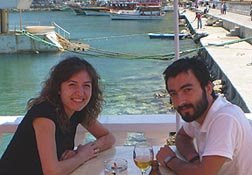 At a café Richard does a watercolour and I watch a beautiful young Turkish couple eat lunch. They seem very much in love. I ask if I can take a photo and they tell me they are engaged.

I also observe an interesting difference between the Turks and the British. The local cat gang is watching a Turkish family eat. The family is not happy. They hiss at the cats, trying to shoo them away. The handsome fiancé from the next table gets up and chivalrously throws some of his bottled water at the cats. The gang of cats flee. How romantic! If the group having lunch were British they’d be feeding and petting the flea-bitten creatures. 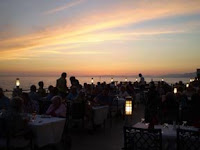 That evening I we have our final dinner on the terrace of the Korumar as the sun sets. The tour group leader has organized a birthday baklava for me and it’s the perfect end to a great trip.

Here are some fun things I learned about Turkey:
1. The toilets have a little spigot at the back so you can wash your bottom after you’ve been...
2. But you have to put used toilet paper in the bin next to the loo. You are not allowed to flush paper down the toilet.
3. The famous Apple Tea (Elma Chai) is just apple juice with hot water added, served in pretty glasses.
4. You get covered with warm puffy bubbles in the hamam (Turkish Baths).
5. In olden times a man in the female part of the hamam would be executed.
6. Today, chances are a burly Turk will give a woman her puffy bubble massage in the hammam!
7. They splash you with lemon cologne on the buses.
8. Children only go to school for half a day, either morning or afternoon.
9. The Turks love a sour cherry drink called 'vishne'; it is delicious
10. Turkish spelling of English words is very efficient. Group is ‘grup’ and toast is ‘tost.’ Who needs those extra vowels anyway? My favourite is ‘oto’ for auto.
Posted by Caroline Lawrence at 11:11 AM