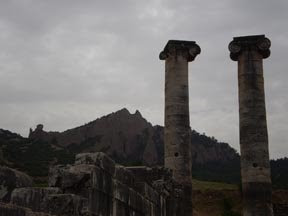 This morning we say goodbye to our Izmir hotel and by 8.30 we are on our way to Sardis, the capital of ancient Lydia. We arrive an hour later and when I step down off the coach, I see our entire group surrounding something and gazing down with delight. It is a pale brown dog lying on the ground and fawning for her adoring public. Every site seems to have its mongrel and they all seem to be related. We notice she has a tag in her ear, the Turkish equivalent of a collar, I suppose.

Sardis was located at the crossroads of a trade route, but it seems an odd place to have a crossroads, surrounded by strange hills, one of which has a rock formation which looks like a giant pointing to heaven. There are also a few standing columns from a Temple to Athena here – one of the biggest temples in the ancient world – and a building which might or might not be a synagogue.

What I never realised was what a big Jewish population Asia Minor had in Hellenistic and Roman times. Apparently, Alexander the Great sent 2000 Jewish families from Babylon and Mesopotamia to this part of the world. These Jews flourished here. This might explain why Christianity caught on so quickly here, in the first century AD it was little more than another sect of Judaism.

The day is overcast with a medium high scum of clouds, but it is still very hot and sultry. A congregation of sparrows are having an excited conference in a pine tree and in a mulberry a dove is cooing what sounds to me like ‘Chicago’. The Greeks thought she was saying ‘dekaocto’: eighteen. In Gerald Durrell's delightful book Birds, Beasts and Relatives, Theodore tells Gerry why the collared dove is called ‘the eighteener’:

‘The story goes that when Christ was carrying the cross to Calvary, a Roman soldier seeing that he was exhausted took pity on him. By the side of the road there was an old woman selling milk and so the Roman Soldier went to her and asked her how much a cupful would cost. She replied it would cost eighteen coins. But the soldier had only seventeen. He pleaded with the woman... but the woman avariciously stuck out for eighteen...the old woman was turned into a collared dove and condemned to go about repeating dekaocto...’ 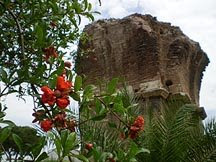 Philadelphia is a small collection of Graeco-Roman rubble in a town called Aleshehir. The ruins are so tiny they aren’t even marked on the map, but someone has planted lots of roses here, and it’s very pretty. We leave Philadelphia and set out for one of the most extraordinary places on earth, the calcium cascades of Pamukkale, known in ancient times as Hierapolis. Warm calcium-rich water bubbles from a mysterious spring somewhere on the mountain. Over thousands of years it has left semi circular pools of steaming water, framed by chalk white crystalline mineral deposits. Pamukkale means 'cotton castle', because it looks like white cotton but also because this area now produces cotton. At the top of the sparkling cliff was an ancient city, Hierapolis, which means ‘holy city’: it was originally a shrine which grew up to be a city. The cascades are going to be the setting for the climax of my next book, The Prophet from Ephesus, so I want to get details of the topography right.

We are heading east with the sea somewhere behind us and dramatic mountains ahead. We cross and re-cross the Meander River. From this distance, perhaps ten miles, the cascades look like a horizontal chalk cliff or perhaps the white gash of a marble quarry. It is quite low compared to the mountains behind. As we get closer, the cascades drop out of sight behind the trees which grow in this fertile soil. Everywhere are pomegranate trees with their red-orange trumpet-shaped blossoms. By late summer these blossoms will be pomegranates.

Now we are climbing a winding road through gorse dotted scrubby brown hills. I can see the Meander Valley to my left and pine woods to the right of the cascades. The coach lets us out into the heat of the day, the hottest yet. We pass through the barriers and into a long necropolis, tombs lining the northern approach to the city. The heat is ferocious and some of the older members of our party have taken a mini-bus. We pass between tombs and finally arrive in the delicious cool shade of a row of tall, dark, flame-shaped cypress trees. I notice that no birds perch in these trees. But there are hundreds of them excitedly chirping in the pine trees nearby.

Now we are passing through a gate built by Domitian, and wishing there was still a colonnade here and a monumental fountain there. How nice it must have been in Roman times to pass through the arch of the city gate and find a cool, shady colonnade and splashing fountains right by the side of the road. 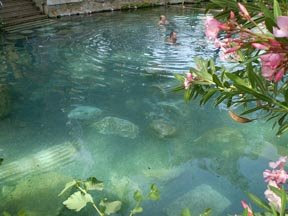 We visit the Antique Pool, where bathers can still swim in warm sulphur-scented waters among ancient columns. Then we take off shoes and socks and wade in some of the pools along with a couple of hundred other tourists. The water is warm and the ‘floor’ quite rough. If you were pursuing a criminal mastermind and slipped and fell here, you could hurt yourself.

Finally our bus takes us on to our hotel. I’d hoped the hotel was within walking distance of the cascades, so I could go back at sunset, but it isn’t. It’s one of a group of four big hotels a couple of miles from the cascades. It has an outdoor swimming pool and an indoor thermal pool.

Once we’ve checked in we check out the pools. I love the thermal pool. It's like a big hot smelly bath with geese spouting water. You have to put on little plastic shower caps but it’s still delicious. I have a good soak, and a dip in the outdoor pool, then get dressed and hire a taxi to take me back to the cascades in time for sunset. Only about a dozen people are up here now and it’s worth the extra expense. I can hear the sound of rushing waters and feel the warm breeze. The sky blushes pink, orange and apricot. The scallop-shaped pools mirror its beauty. Dusk lasts a long time and it’s nearly an hour after sunset before the first stars appear.

Posted by Caroline Lawrence at 6:45 AM