Today we’re visiting three ancient sites: Priene, Miletus and Didyma. On the excursions board in Kusadasi they call this PMD. *hee*

We set out fairly early, heading south along the winding coastal road with the blue sea on the right. This is the reverse route Flavia and her friends will take when they go from Halicarnassus to Ephesus. There is a row of charcoal-sellers beside the road, something I have never seen before. The hills are clothed with pine, gorse, grasses, red poppies and silver-green olive trees. Straight ahead is a dramatic range of mountains, the Taurus range. Flavia et al will have to cross that from Halicarnassus.

We pass a horse standing in a river up to the knees of his forlegs; he’s drinking water and tearing the lush grasses there. Two shaggy brown goats are tied to stakes by the roadside.

Priene lies at the end of a spur of smaller hills. It’s up in the hills, away from the malarial river plain, and there are pine trees everywhere. It has a lovely little theatre, a bouleterion and two lofty columns marking the Temple of Athena. There is a lovely cool breeze up here among the scented pines, and birdsong everywhere. No wonder it’s many people’s favourite site.

Now we’re going down into the Meander valley. We get the word meander - to wander sinuously back and forth - from this famous river, which Herodotus called ‘The Great Labourer’. The part we are driving on used to be the sea. Like the Tiber, the Meander lays down silt every year, causing the coastline to advance. This was even a problem in ancient times. Ephesus was a port town but is now a few miles from the coast. Just like Ostia Antica.

We pass Miletus, saving it for our return trip, and press on to Didyma, which didn’t used to be by the sea but is now. There is a massive sanctuary to Apollo here complete with tunnels for his priestesses, and the famous Medusa reliefs which you often see in guide books. I discover an interesting tree on the site with fat bright green seed pods. I ask our Turkish guide what it is. She only knows the Turkish name: keçi boynuzu or ‘goats’ horns’. I later find out it is a carob tree. The pods are also called St John’s bread because John the Baptist may have eaten them when he lived in the wilderness. The Greek word 'akridas' either means carob pods or locusts. I think I’d prefer carob pods. They are used as a chocolate substitute today.

After lunch at a place with long tables which caters to coach parties we go on to Miletus. It’s now the hottest part of the day. Even the chickens have enough sense to stay under the shade of the bushy pine trees. 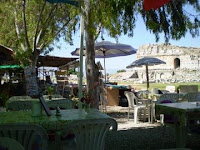 We’re the only party here and I look longingly at the little cafés set out in the shade of a strand of rustling eucalyptus trees. Swallows are swooping over the bleached grasses and the theatre. This one also has lions’ feet decorations, but it has an interesting inscription on one of the seats: ‘For Jews and God-fearers.’ St Paul came here to Miletus to say farewell to his Ephesian friends. They wept when he said they would probably never meet again. Our guide takes us up to a vantage point and I can see there is virtually nothing from the first century still standing. She gives us free time to explore the ruins, but Richard and I head for the outdoor cafés.

Sipping our cold drinks in the breezy shade on a hot afternoon, we look out at the ancient theatre and enjoy the complicated and joyful song of a swallow above us. This is one of my best memories of the whole trip. It’s the bits between the ruins I love most.

When people ask me what I enjoyed most about Turkey, I tell them the hamams and the comfort stops.
Posted by Caroline Lawrence at 4:32 PM