Back in April of 2009, I blogged about the Riddle of the Portland Vase: who are the figures depicted on it? 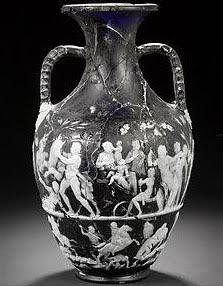 Yesterday Bonhams, the London-based antiquities dealers, announced they have another Roman cameo vase on loan from a mysterious owner. You can read about it HERE. This is very exciting news to all Roman historians, archaeologists and glass experts. If the vase is genuine, and not a clever fake, it could rival or even surpass the Portland Vase in fame. This vase is so 'new' that experts aren't even sure what to call it. I will call it the Bonhams Newby Vase**.

So far the pictures of it are so small that it is hard to see any detail, but it is possible to get a rough idea of what is happening. 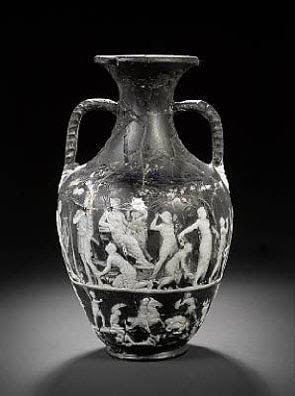 On one side is an heroically nude beardless youth trying to calm a horse bull (see comments below). Beneath the horse bull a woman rises up out of the ground: maybe a personification of a river? On the hero's left is a woman with lots of babies or Cupids. There are more figures to her left, including a struggling pair?

On the other side of the vase is a bearded man on a throne holding what might be a trident: Neptune? He is turning his head to look at a man in a tunic on his right. The man is turned away. A woman is clinging to the man's leg as if asking for mercy. To the right of the seated god are three other figures, one of whom seems to be dancing, like a maenad. In front of her a boy may be clapping his hands.

Underneath the two main scenes is a battle between figures on horseback and foot soldiers. We might expect Greeks v. Amazons or Centaurs v. Heroes but the battle depicted on the vase is not either of these.

Experts will be poring over this vase during the next few weeks, trying to determine whether it is real. One of the tests they might perform is on the chemical content of the glass, which will contain amounts of lead. If the lead content of the white glass on the vase matches the percentage of lead content of the Portland Vase then it is almost certainly genuine.*

Despite the handicap of not being able to examine the vase in close detail, my detectrix Flavia Gemina might try to determine whether it was real or not by making a list of clues. 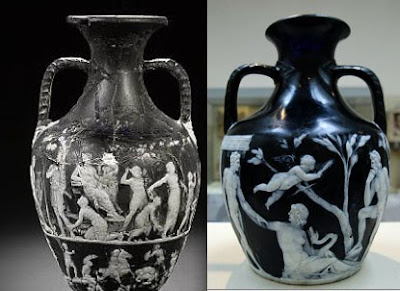 Clues that the Bonhams Newby Vase might be real.

1. Perhaps the shape and style is too similar to the Portland Vase!
2. At first glance, it seems coarser than the Portland Vase, but it might just need a good clean.
3. The scenes are much more crowded and not as 'artistically' composed.

On balance, Flavia would conclude that the Bonhams Newby Vase is genuine. (Or by a very skilled and diabolically clever forger!)

Want to know more about Roman cameo glass? A new book called Roman Cameo Glass in the British Museum will be out in March. It is written by a team of experts: Paul Roberts, William Gudenrath, Veronica Tatton-Brown and David Whitehouse.
.
*P.S. My friend Mark Taylor, a Roman glass expert, says this:
The white glass will have lead in it, but it will not necessarily be similar in amount to that of the Portland Vase, though it would be nice if it was. Glass batches in the ancient world, although all based on a soda-lime composition, were different for virtually every potfull that was melted - due to the impurities in the raw materials and to the recycled glass that was added to the melt. They were also dependent on the required colour. If the compositions are very similar, then it is possible that the blanks were made within a day or so of each other.

**P.P.S. I have since decided that The Newby Vase is a better name than the Bonhams Vase. Martine Newby of the Ashmolean Museum is the clever scholar who first realised the worth of this big Roman cameo vase.

[The 17 books in the Roman Mysteries series are perfect for children aged 9+, especially those studying Romans as a topic in Key Stage 2. A new series set in Roman Britain follows characters from the Roman Mysteries a dozen years later...]
Posted by Caroline Lawrence at 8:09 AM 4 comments: 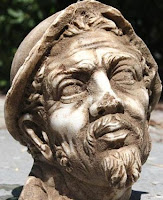 There is great excitement among Classicists and archaeologists about the University of Southampton's find of what may or may not be a luxury mini-amphitheatre in Portus, the imperial harbour fourteen miles west of Rome. I've just been looking at the pictures on the BBC photo gallery and saw this wonderful head of a bearded man (left) wearing what might be a pileus. The pileus was a felt skullcap, rounded or pointed. It could be the hat of a freedman, but also of a craftsman. 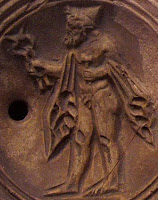 The bearded head from Portus made me think of a marvellous collection of oil-lamps I saw in Lipari (one of the Aeolian Islands in Sicily) in May. One of the oil-lamps depicts a bearded man wearing a pileus. His hammer and tongs show he is a blacksmith. His heroic nudity hints that he might be Vulcan, god of fire and the forge (and fish), and husband of Venus. I wonder if the bearded head from Portus could be Vulcan? According to Smith's Dictionary, Vulcan (AKA Hephaistos) was one of the few mythological figures who wore a felt skullcap. Also, Vulcan had a strong presence in Ostia, a few miles south of Portus.

But another famous character from Greek and Roman mythology often shown in a skullcap is Odysseus. The bearded head from Portus is very similar to the head of the Odysseus from Sperlonga , where the emperor Tiberius had a monumental sculpture of Odysseus blinding the cyclops in a grotto of his summer retreat. (The name Sperlonga comes from Latin speluncae i.e. "grottoes"). (below: bearded head from Portus & Odysseus from Sperlonga) 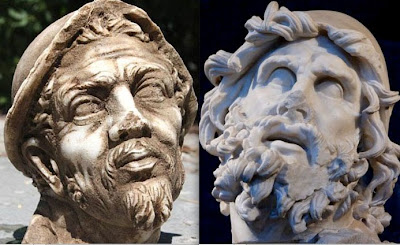 The monumental sculptural group of Odysseus blinding the Cyclops Polyphemus was a popular one. The emperor Domitian had a similar sculpture in a grotto of his imperial retreat on Lake Albano, fourteen miles southeast of Rome. I saw fragments of it last April when I toured the ruins of Domitian's Alban Citadel at the Pope's summer retreat in Castelgandolfo. Sadly, Polyphemus is all that survives of Domitian's monumental group. (below) 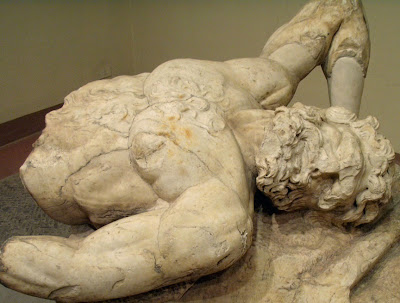 Other figures from Greek mythology who wore the felt skullcap were Charon the ferryman and Daedalus the craftsman and father of Icarus.

You can read all the reports about the 'luxurious mini-amphitheatre' at Portus on the official Portus Project site, but do also read Mary Beard's caveat!

[The 17+ books in the Roman Mysteries series are perfect for children aged 9+, especially those studying Romans as a topic in Key Stage 2. There are DVDs of some of the books as well as an interactive game. Teachers, check out the SCHOOLS page.]
Posted by Caroline Lawrence at 8:00 PM No comments: