How We Wrote Amarantus by Caroline Lawrence

In July of 2018 I was invited to join a team putting together an online ancient history module for students in Key Stage 3.

Headed by Caroline Bristow of the Cambridge Schools Classics Project, this online course would be based around the ancient Roman inhabitants of the so-called House and Bar of Amarantus in Pompeii. Archaeologists Andrew Wallace-Hadrill and Sophie Hay would provide the physical evidence; Greek Myth Comix artist and Classics teacher Laura Jenkinson would illustrate it; historians like Olivia Elder would advise and I would write a narrative incorporating some of what we know about the residents.

The story would be fictional, showing daily life of a middle-class Pompeian family, but based on the archaeology, especially the house plan, artefacts, graffiti and plant remains. Caroline Bristow wanted six modules each based around a specific topic, such as Roman Beliefs and Ancient Food. 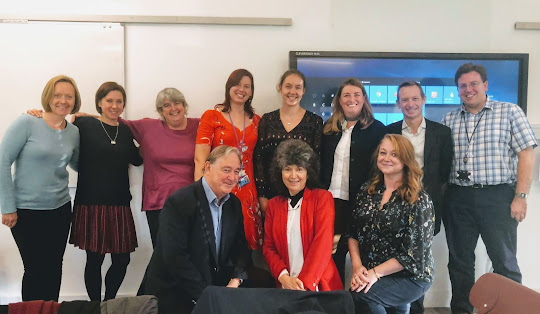 Instead of making up my own plot, as I usually do, I had to stick to the six specific topics. I was also given a wish-list of scenes and ideas to incorporate, especially by Dr Sophie Hay, who helped excavate the site for several years and discovered the remains of a mule and dog in one of the front rooms! I felt like writer on a TV show working with a room full of collaborators. We had to decide the age and status of our hero Amarantus, when to set the story, the time span of the narrative and other elements of the plot, (like the names of the mule and dog).

Most books or stories about Pompeii conclude with a bang: the town’s destruction by the eruption of Vesuvius in 79 CE. However, archaeologist Sophie Hay was keen to set our story seventeen years before the eruption when a sizeable earthquake rocked Pompeii. I suggested we begin the book with a bang: the earthquake. But Dr Sophie (as we call her) was adamant that the earthquake occur halfway through. After a few days of sulking, I realised she was right. There is often a dramatic event at the halfway point of a story and this could be it. It could also show that what seems to be a disaster for many can be a blessing for a few. The earthquake becomes crucial for Amarantus’s personal journey from slave to successful freedman.

The earliest age that a slave can be manumitted is thirty. So we decided to make Amarantus thirty. Graffiti shows him with spiky hair and a bulbous nose. So we incorporated those elements into our story. And what about the dead mule and dog? I couldn’t bear to write a story with unhappy animals so decided to give them to Amarantus and also to make him soft-hearted, which I’m pretty sure was not the case for most ancient Romans.

Once we agreed these basic elements, I was given free rein. My main motivation as a writer of historical fiction has always been to transport readers back in time, using soundscape, smellscape, touch and taste as well as visual descriptions. That is what I wanted to do here. I also set myself the challenge of making each chapter unique and compelling. Finally, I wanted to show how like us the ancients were, but with a surprise or even sting at the end of each tale, reminding people how unlike us they were.

I wrote the first draft in a few months, finishing it by Christmas of 2018.

Esteemed professor Andrew Wallace-Hadrill whom I have nicknamed the ‘Myth Buster’ challenged many of my decisions. Did they really have ‘wheels of cheese’ in Roman times? Is there actual evidence of betrothal rings? We had to find evidence! I too am obsessed with accuracy and I long to know what it was really like in the past, so I didn’t mind at all.

Because this story is set in the ‘universe’ of Caecilius, Metella, Quintus et al from the original Cambridge Latin Course book, we decided to put in a few ‘Easter Eggs’. I believe James Watson suggested a cameo by baby Quintus.

Olivia Elder, our graffiti expert, requested graffiti only found in Pompeii and the environs. This included a few quotes from Virgil. Again, I was happy to comply.

Then in came Laura Jenkinson-Brown, our amazing Classics teacher by day and illustrator by night. As she began to draw the scenes, this raised a myriad of new questions. How BIG was a wheel of cheese? What does a wineskin actually look like? Where would the shadows fall in a west-facing dining room? Laura went as far as constructing 3D cardboard models to better depict some of the scenes and even persuaded her delightful husband Sy to pose with soft toys while she sketched the characters.

At this stage we all contributed, especially Dr Sophie, who knows the house and bar of Amarantus like the palm of her hand. Sometimes Sophie, Laura and I were sending comments on the illustrations back and forth into the wee hours. Did we grumble? No! We loved every minute of diving down these many rabbit holes.

The Amarantus Project turned out to be one of the most enjoyable projects I have ever worked on. I would like to thank the CSCP team and all the other brilliant and meticulous scholars who helped me write this story. This truly is a labour of love. I’m sure my collaborators would all agree when I say that we hope this book will grip middle grade readers and get them as excited about Pompeii and the past as we are.

P.S. You can now buy the book Amarantus and his Neighbourhood from Amazon. If you want to dive down more rabbit holes with us, go to the interactive site, www.cambridgeamarantus.com, where there is evidence for almost every line in this book.

P.P.S. Observant readers will spot that street urchin Sophe resembles Dr. Sophie Hay in certain respects. This was a clever visual tribute by Laura Jenkinson-Brown, who also represents herself as one of the characters. Can you guess which one?

Posted by Caroline Lawrence at 10:47 AM No comments:

How to Get Published by Caroline Lawrence

People often ask me how to find a publisher for their books. Here is my advice. 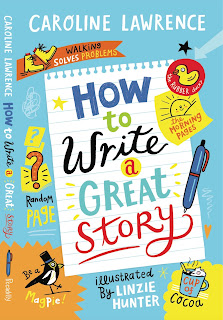 1. DON'T SUBMIT YOUR FIRST BOOK
Make sure your book is the best it can be. I read somewhere that it is usually a writer's fourth book that gets published. You are still learning to write during the first three. I personally have several failed attempts in a drawer. I might go back to them later, but no way am I submitting them without a major rewrite first. Of course there are always exceptions to this rule!
2. READ THE BASIC BOOKS
I am amazed by the number of people who tell me they want to be a writer, but have not read any basic books on writing. Here are five essential books I would recommend. Do not even think about sending your stuff to an agent until you have read these (or something similar.)
1. Becoming a Writer by Dorothea Brande
2. The Artists Way by Julia Cameron
3. On Writing by Sol Stein
4. Word Painting by Rebecca McClanahan
5. On Writing by Steven King
3. LEARN THE CRAFT
For me, the structure used by Hollywood screenwriters is most helpful. My breakthrough was hearing an audio course on Story Structure by Hollywood script guru John Truby. I realised that I needed a road map to keep my story fast moving, compelling and on course. Some people object that popular movies are 'formulaic'. You be they are! That's why they are popular. Writing is a craft like carpentry. You need to learn the skills involved. I have written a book with all the tips and tricks I learned from scriptwriters and movies which I hope will help prospective writers aged 8 to 80. It is called How To Write a Great Story. Read it. Apply the principles. Have fun!
4. GET SOME DISTANCE
Once you have written a book you think is good enough to be published, put it aside while you work on your next project. Then come back to the original book. You will be amazed at how much you will want to change about it.
5. GET AN AGENT
Very few publishers will look at stories sent to them by a person they don't know. They will only consider manuscripts submitted by an agent. To find an agent you have to search through a book called The Artists & Writers Yearbook (or its US equivalent) and send the first three chapters and synopsis of your book to likely agents. Even getting an agent is difficult these days, but hopefully one of them will like your story and start sending it out to publishers. Most agents take 10% of every payment you receive. It is worth it. Even after they have found you a publisher they do all the tricky stuff like asking for more money. This keeps your energy free for creative writing.
6. DON'T GIVE UP
One thing that separates successful authors from unsuccessful ones is persistence. Keep at it and don't give up. Don't listen to anybody who says you can't do it. Believe in yourself and in your desires. You have to be single-minded. Sometimes you have to sacrifice other things in your life. (For ten years I used to get up an hour early to write. I was a single mum with a long working day as a teacher.) Go on courses. Read books about the craft. Get together with other writers to encourage one another. Listen to podcasts like Prepublished and Writers Routine. There are many YouTube clips about writing, too.
7. WRITE TO ENRICH NOT GET RICH
J.K. Rowling is a once-in-a-century phenomenon and therefore NOT a helpful role model! If you are one of the lucky ones you will make a living by writing. But don't make that your main motive. Instead, write the sorts of thing you would like to read. Write about issues and questions that really interest you. Then, even if your book never gets published, the hours you put in will not be lost. They will have enriched your life. That is the best advice I ever heard, and I got it from my mentor, the wonderful John Truby.
Happy writing and good luck!
Caroline
P.S. I’m sorry but I don’t read other people’s stories unless they are about to be published and need a quote or last minute notes. If you would like a professional to read your novel then I suggest you contact the excellent Jericho Writers. Of course you will have to pay them, but if you want to be a writer then it is worth it.
[This is an article I wrote over ten years ago in 2011 but I have given it a light update!]

Posted by Caroline Lawrence at 5:25 PM No comments: