As an author of 17 novels and a dozen short stories, the most frequent question I get asked is "Where do you get your ideas?" Well, from books like Vicki Leon's is one place! 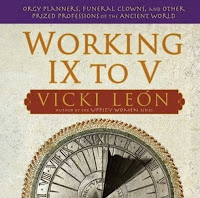 I bought the wittily titled Working IX to V a few years ago and have been dipping into it with great pleasure. It's all about strange jobs and careers from Ancient Greek and Roman times. She mentions well-known jobs like Gladiators, Pirates, Vigiles, Bakers, Garum-makers, etc. But she also talks about less well-known careers, that of the Armpit Plucker, Amber scout, Cryptologist and Funeral Clown. In one of her accounts, that of the Stercorarius (manure salesman), she mentions the ancient Roman urban myth of a giant octopus in the sewers. This one line gave me the idea for the entire plot of a new book I am working on called The Sewer Demon. 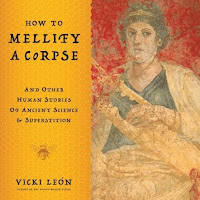 Vicki Leon's latest book, hot off the press, is called How To Mellify a Corpse. Glancing through it, I see she covers topics such as Gems and Gem fakery (idea there for a counterfeiting gem-maker); Stealth Bombs and Stench Warfare (more ideas for deadly poisons); Model flying dove designer Archytas (would be good for a slapstick plot). There is also a chapter about how Alexander the Great decided to be embalmed in honey (i.e. mellified) rather than be cremated like a good Greek boy. That's where the title of the book comes from. Vicki is also posting more free ideas on her great blog called Historical Detective.

Vicki Leon is erudite and witty. Here are some of her throw-away lines: "The Greeks had an edifice complex", "Entrail reading ... splashy in multiple senses of the word", "In days of yore, honey got a lot of buzz", etc.

Above all she is a genius at linking the ancient and modern.
Witness the following chapter headings:
Religious Syncretism: The Grinch who stole Saturnalia
Refrigeration: The Big Chill B.C.
Acoustics: The first surround sound
Ghosts and worse: Necromancing the Stone
Arena Addiction: Franchising Blood and Sand
Archimedes part 1: Early googling

Vicki's books are a veritable gold-mine of ideas for writers like me.
Teachers can use her fun topics as starting points for projects.
And if you, a family member or friend is a lover of Classics then this is the perfect book for dipping in and out of in, maybe in the latrine!

How To Mellify a Corpse is fascinating fun and I give it X out of X. Enjoy!

[The first of the new Roman Mysteries Scrolls series for kids 7+ is The Sewer Demon. Future titles include The Poisoned Honey Cake and The Thunder Omen. The 17+ books in the existing Roman Mysteries series are perfect for children aged 9+, especially those studying Romans as a topic in Key Stage 2. There are DVDs of some of the books as well as an interactive game.]
Posted by Caroline Lawrence at 8:58 AM 3 comments: