In honour of Valentine's Day, a teaser from the final book in the series:

Fifteen-year-old Flavia Gemina trembled as her stepmother advanced steadily towards her, a spear pointed at her head.

‘Are you sure it’s supposed to be so sharp?’ whimpered Flavia.

‘This is the same one they used on me three years ago,’ said her stepmother with a smile. ‘And so far the gods have blessed my marriage to your father.’

‘But couldn’t you just use a very dull spearhead?’ pleaded Flavia. ‘Instead of the whole thing on its shaft?’

‘No. We have to part your hair seven times with the point of a sharp spear. That’s the way it’s done.’

Flavia’s dark-skinned friend Nubia came forward. She and Pulchra grasped the shaft behind the spearhead while Flavia’s young stepmother shifted her grip slightly. Then the three of them carefully used the point of the spear to part Flavia’s light brown hair, first in the middle, then three times on either side. Flavia tried hard not to tremble and it only pricked once.

‘I suppose not,’ said Flavia, but she kept her head perfectly still in case she lost the partings. ‘Are you going to plait in the blue ribbons and pearls you brought me, Pulchra?’

‘Me? Do the job of an ornatrix? Certainly not! Leda will do your hair. Now sit in this chair by the balcony. We can use the light of the setting sun.’

Flavia glanced at Pulchra’s slave-girl Leda and smiled. Although she and Pulchra had been writing to each other regularly for the past few years, Flavia had forgotten how imperious her friend could be.

‘However,’ said Pulchra, ‘I will do your makeup, because that requires the skill of a true artist.’ As Leda and Nubia moved behind Flavia to do her hair, Pulchra went to get the make-up tray.

‘Don’t listen to her,’ laughed Flavia’s stepmother over her shoulder. She had draped the gauzy, saffron-yellow wedding veil over the balcony so that she could sprinkle it with rose water. ‘You’ve become a lovely young woman.’

Pulchra sat on a small stool in front of Flavia and rested the tray on her lap. ‘All I meant,’ she said, ‘was that tonight is the most important night of her life. We don’t want the bridegroom having second thoughts.’

‘Humph,’ said Pulchra, and to Flavia: ‘Are you nervous?’

‘You’re not nervous that in a very short time your bridegroom is going to burst in here and snatch you from our arms and carry you off to his bed while boys in the procession sing lewd songs and pelt you with nuts?’

‘I do wish you’d tell me more about this man you’re marrying.’ Pulchra unscrewed a little tin pot and sniffed the contents with satisfaction. ‘You’re so secretive about him in your letters.’

You can find out whom Flavia marries in The Man from Pomegranate Street.

[The 17+ books in the Roman Mysteries series are perfect for children aged 9+, especially those studying Romans at Key Stage 2 and 3. The DVDs are not currently being printed but you can download episodes from the first series via iTunes HERE.]
Posted by Caroline Lawrence at 6:45 PM 83 comments: 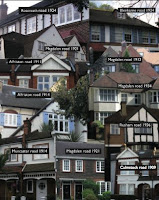 My husband Richard (who feeds me) is not just a good cook. He's also a talented writer and historian. He has written Mammoth Books of eyewitness accounts, as well as books on English architecture. (Richard and I knew we were meant for each other when we discovered we both adored the historical novels of Mary Renault and Patrick O'Brian.)

Richard's latest book is called The Book of the Edwardian and Interwar House. It's a book your mum and dad might like. No beautiful slave-girls, gladiators or pirates, but rather door-knobs, toilets and gables. In fact, if you live around Northcote Road, your house might even be in the book. But there are also houses from Manchester, Hertforshire and Nottinghamshire.

Anyway, you are cordially invited to bring your mum or dad to Richard's book launch at our local bookstore in Battersea, London:
Bolingbroke Bookshop
147 Northcote Road
Battersea
London SW11 6QB

The party starts at 6.30pm on Thursday 26 March. Although the night is Richard's special night, not mine, if you bring a Roman Mystery I will happily sign it for you.

Winners of the Golden Sponge-stick Award!

...and some of the runners up

Jeremy Pine, Head of Classics at the Royal High Bath, and organizer of the Golden Sponge-Stick Award for writing a Roman mystery, just sent me a selection of winning entries and some of the runners-up. I think they are all brilliant and I am now beginning to worry about competition! Here are the first few lines of each of the entries he sent me:

Rome in My Attic
‘You’ll never guess what is in my attic!’ whispered Kate, as she raced her friend Charlotte up the stairs. She had painted and decorated the attic to look like ancient Rome. They were learning it at school and Kate knew that Charlotte would be very interested because she loved history.’

by Isabel (8) winner in the under 9 category (above right, with her prize!)

When Kate and Charlotte get to the attic they find they are transported to ancient Roman times. Isabel does a great job of imagining what Roman Britain would look like to a 21st century schoolgirl, with lots of smells and strange sights.

Godlings
‘The piece of wolf-skin tent I’ve been staring at for the past half-hour isn’t particularly interesting. In fact, if it had been any other time, I would have been bored to death long ago. But I needed something simple. Something pure that I could immerse myself in and blank out everything: the sound of merriment beyond the walls, the numbness of my hands, the hatred towards the people outside that I had known as friends for as long as I can remember.’

From a story about identical twin girls growing up in Roman Britain, with a surprising ending. One of the many reasons I love this entry is because Eilidh has really put herself in her character’s position. This is great stuff!

The Ghost
We made our way to the villa under a new moon and a cloudy sky, the chirrs of insects leaping out at us from all directions, picking through a wheat-field so overgrown and dark that I could barely walk through it without stumbling. It was neither the unnerving shadowy darkness of the city’s alleyways nor the serene darkness of a bedroom late at night.

by Lucy, winner of the 14+ category

Aperio*
Blood spattered the grass around Centurion Hortentius. The veteran lunged with his gladius yet again, taking the huge Briton in the throat. ‘Tighten the ranks!’ he bawled at his men, who compacted at the command. The noise of the fray was terrible: these naked warriors, leaping onto the weapons of the legionaries, seemed to be never ending, charging at the fragile line, screaming war-cries as they rushed to meet their deaths, taking as many of their hated foes as they could with them.

By Craig, second place in the 14+ category

A murder occurs in the middle of a bloody campaign of Romans in Britannia. This entry shows an excellent knowledge of how the Roman army fought with great attention to clues and procedures. I especially liked the phrase ‘a face like the back end of a cyclops.’ Simon Scarrow, watch your back!

*aperio means 'I reveal' in Latin

Clea
It was humiliating. Passed around from grimy hand to grimy hand, being held in such awkward positions that she yowled pitifully. Her own girl’s hands were gentler and cleaner. They knew where she liked to be petted and how she liked to be held. She would have scampered off by now if it wasn’t for the delicious prospect of a tender minute with her own girl.

Josie’s clever story is told from the point of view of a cat who witnesses the destruction of Pompeii and who tries to save her young mistress. Josie convincingly adopts the mentality of a cat, while keeping a Roman feel to her descriptions.

The Amphitheatre
‘Look, Rufus, it is about to begin!’ exclaimed Gusto, scampering to one of the highest viewing points. Rufus quickly followed as he did not want to miss anything. The crowd roared as the gladiators entered the amphitheatre, the sunlight gleaming off their armour. ‘Shift over I cannot see!’ Rufus nudged Gusto and he shuffled over.

Another witty story told from an animal’s point of view. This time two rats watch the famous riot between Pompeians and Nucerians in the amphitheatre of Pompeii. I like the way Emma took a true historical incident and put her own rodent-y touch on it.

Well done to all who entered! Bene fecistis! 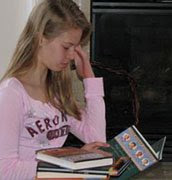 One of my top fans in America, who is also named Caroline Lawrence (hey! It's a good name!) has all my books in British English and all my books in American English. Not only is Caroline beautiful, but she is also very clever (like all RM fans) and she has recently won some prestigious spelling bees. Her favourite character is Nubia and she admits she is 'in the queue for Aristo'. Now Caroline has come up with this fun list of how to tell when you're a REAL Roman Mysteries fan. How do you score?

'You know you're a Roman Mysteries fan when...'

~ You want to be friends with every asthmatic person you know.
~ You have read British AND American copies of the same books.
~ You give little nicknames to the books (i.e. Dolphins for The Dolphins of Laurentum)
~ You coordinate your outfits with Roman Mystery book covers.
~ Most of your mottoes are either in Latin or quotes from the series.
~ You got the list of character birthdays from Caroline Lawrence's website and you celebrate them.
~ You have a little fit whenever someone says a word that has Latin or Greek roots
~ Or whenever you see the 'Mute' button on the TV remote.
~ You refer to yourself as "the fifth friend".
~ You accidentally call friends and family by Roman Mystery character names.
~ You went into mourning after reading The Slave-girl from Jerusalem.
~ You can quote whole scenes from the books, complete with expressions.
~ When falling asleep at night, instead of counting sheep, you count women who are in love with Aristo.
~ You use rhetor's gestures to communicate with friends in class.
(Bonus points if you use them so much your friends think you made them up.)

Thanks, Caroline. You are definitely a Top Fan!
Posted by Caroline Lawrence at 11:16 PM 9 comments: