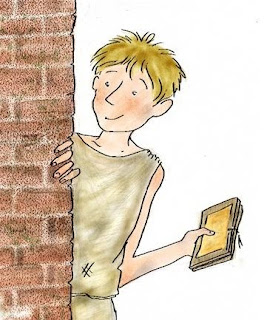 How do you research the Western genre when you live in London?

Last month my husband and I attended the Santa Clarita Cowboy Poetry and Music Festival. One of the best things about it was meeting lots of other Western movie fans. All of them were friendly and all of them gave us advice about things to do and see and places to visit. 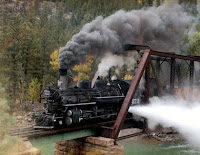 We met Jerry and Sharon over the plaque of Graham Green on Newhall's Western Walk of fame. (Graham Greene played Kicking Bird in Dances with Wolves). They gave us some recommendations. They told us to go to Durango, Colorado and ride in the open car of the Silverton Railroad. (above) "The nearby Indian ruins are stunning", said Jerry. "Like Mesa Verde." They also said we should visit Williams, Arizona. There is a train tour of two days and two nights with all meals included. "And watch out for the natural spike in Sedona, Arizona," said Jerry. "You have never seen red rocks like them."

Sharon's favorite Western film is Murphy's Romance, a rom-com with Sally Field and James Garner. Jerry likes The Shootist, John Wayne's last film. It was filmed partly on the Warner Brothers Western lot (no longer there) and partly in Carson City, Nevada, near the governor's mansion. 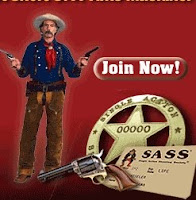 Waiting for the shuttle to take us to Melody Ranch Movie Studio's for an open-air showing of High Noon, I got talking to Sampitch Kid, named after a river that runs through Utah. We talked about firing cap and ball revolvers and he told me I should check out the Single Action Shooting Society: http://www.sassnet.com "The closest you'll get to the Old West short of a Time Machine." Dang, that looks like fun! You even get to choose your persona and a period name. Hmmm. Maybe I could be my great grandmother Corinne Prince: schoolmarm, quilter and buffalo-hunter.

Standing in line for grub at the movie night, I got talking to Western journalist Mark Bedor. I told him about my new Western detective series set in Virginia City, Nevada in the 1860's. "So why are you here at the Melody Ranch?" he asked me. "To get a sense of the smell and sound and feel of a western town," I said. "The light, for example. When you walk into a saloon your eyes need to adjust because it's so dim in there." When I mentioned the light, Mark got excited. "Yes," he said. "I recently did Cavalry School and we were riding on the plains of Montana. I've never seen light like that big sky." "Cavalry School?" I said. Mark nodded happily. "I spent a week riding with Custer for Cavalry School. You can't understand it until you've done it." He gave me the link for an article he wrote and told me the website: www.uscavalryschool.com

"You want to ride?" said Mark. "Go to White Stallion Ranch in Tucson, Arizona. They will match you with the right horse and at the end of a week you'll be cantering and galloping." (Horses of the White Stallion) 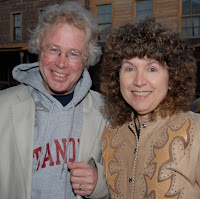 "I know your books are set in Virginia City, Nevada," he added. "But you should also visit the Virginia City in Montana. And Red Rock, Utah." Mark also recommended some reading: John Gray on Custer, a book called Apauk, Caller of Buffalo by John Willard Schultz and Trails Ploughed Under by Charlie Russell. Mark even took a photo of me in my new buckskins with Richard. (photo by Mark Bedor)

Later in the week I went to an elementary school to talk about my other history mystery series, The Roman Mysteries. The class teacher's father picked me up in Santa Clarita and while we were driving to Chino he told me about Oatman, Arizona, a town named after a young woman kidnapped by Indians. "You can see the real thing there," said Dave King. "Once I went into a saloon to use the facilities and there were old timers there propping up the bar like in those Westerns. You can also see donkeys roaming the streets." Apparently there is an egg-frying contest on July 4th every year. (www.oatmangoldroad.org)

Thanks, "Old Timers", we'll definitely ride the railroad, sign up for a week at White Stallion and visit Oatman!
Posted by Caroline Lawrence at 5:17 AM No comments: