North of the Border

It's 9.00pm, the mercury is nudging 90 degrees fahrenheit... and it's nearly November.

We have just arrived in Tucson, Arizona.

The name "Tucson" – pronounced too-sawn – is the English spelling of a Spanish version of an Indian name meaning "at the base of the black hill". Tucson is also known as "The Old Pueblo". Only 60 miles north of the Mexican border, this state is famous as being the setting for lots of western movies. You know. The ones with dramatic rocks and iconic cactus, like Red River, 3.10 to Yuma (both versions) and Tombstone.

I'm here to research my new series, The Western Mysteries. My books are set in Nevada but we have come here to spend a few days at one of the best Dude Ranches in the world, the White Stallion Ranch.

They say you should always have a goal, so here are five things I hope to achieve while here.

OK, that last one was a joke. I don't even know yet if there are prairie dogs out here. A visit to the Desert Museum should answer that question. 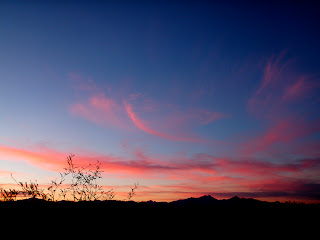 P.S. Sunday morning... Just went for a walk. Lovely sunrise over the mountains.
Posted by Caroline Lawrence at 2:08 PM No comments:

This Saturday my husband Richard and I are flying to Tucson, Arizona to spend a few days at a Dude Ranch. The White Stallion Ranch was recommended to me by journalist Mark Bedor. I met him when we were both standing in line for grub at the Cowboy Festival at Melody Ranch, waiting for an outdoor screening of High Noon. Mark told me I absolutely had to visit White Stallion Ranch if I ever got the chance. So now we are.

When I tell friends we're going to a Dude Ranch they mostly know what I mean. But some don't. That got me thinking. Why "Dude Ranch"? The word "dude" makes me think of Bill & Ted, or The Big Lebowski. But when the word "dude" was first coined in the 1870's, it meant a well-dressed (i.e. rich) city-dweller. According to Wikipedia, the King of the Dudes was a gentleman named Evander Berry Wall. (right) I don't know about "well-dressed"... His coat looks like a bell-jar swallowed a kilt and then burped up some clown buttons. But at least his shiny stovepipe hat matches his patent leather shoes.

So a "Dude" is essentially the opposite of a cowboy. And a "Dude Ranch" (AKA Guest Ranch) is where affluent city dwellers go to "get the Western experience". Today in the US, there are over 100 quality Dude Ranches. You can do full-on cattle drives and squat in the sagebrush, like Billy Crystal and his pals in the fun 1991 film City Slickers. ("Hello boys. I thought I'd mosey on over here. You know, I've never mosied before...") Or you can sit by the pool sipping strawberry margaritas and watching horses from upwind. I think the White Stallion Ranch will be somewhere in between.

The folk at WSR are certainly trendy. They tweet regularly and they are gratifyingly active on Facebook. When I asked them if Richard really truly needed boots to ride, they said any leather-soled shoe with a heel was OK, but boots are best. When I asked if he should buy them here in London or at Boot Barn in Tucson, they said buy them in London. Especially after they found out about our trendy boot shop on the Kings Road in Chelsea.

The wryly named R. Soles (say it out loud) sells fab boots designed by Judy Rothchild and others. You can either go to their shop or buy online. I bought a pair of boots there two years ago in anticipation of a Thelma-and-Louise memorial road trip with my sister. Jennifer and I didn't drive into the Grand Canyon, but we did spend an hour file-riding in Death Valley at sunset. We booked a short session at the glorious Furnace Creek Stables. Everyone there was very nice and professional, but the moment I swung up into the saddle, my mustang knew I was a dudette. He stopped to munch tasty sage whenever he felt like it and ignored my firm prompts to get moving. We were only there for a few hours, so the wranglers didn't have time to teach us anything. 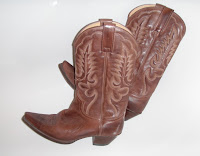 Next week, however, I hope to really learn to ride a horse, not just sit astride one in my designer cowgirl boots. Richard is coming, too, and my sister Jennifer will meet us there. To see how the three of us get on, watch this space.
Posted by Caroline Lawrence at 10:25 AM No comments:

Virginia City in 1862 is a glorified silver-mining camp on a barren mountain with a landscape like a singed cat. Seething with miners below ground and hustlers above, it’s a deadly place. 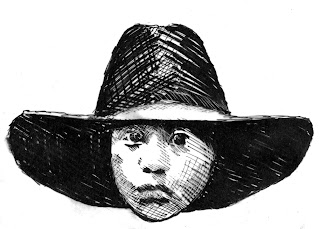 Pinky’s dream is to work for the Pinkerton Detective Agency in Chicago. But there is so much crime in Virginia City that soon the town has its first detective: P.K. Pinkerton, Private Eye. 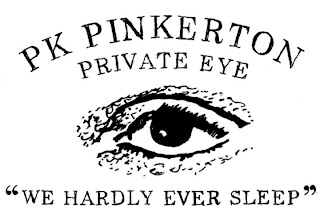 When desperados kill the preacher and his wife in a small frontier town, their foster child P.K. is forced to go on the run. P.K. must get a valuable letter to the Recorder’s Office before anyone else can get their hands on it. It’s not easy: Virginia City is full of gamblers, hurdy girls, saloon-keepers and gunmen, all of them on the make. But there are possible allies: Sam Clemens, the new reporter for the paper; a gambler called "Poker Face Jace"; a derringer-packing Soiled Dove, and a Chinese photographer’s apprentice named Ping. Will P.K. survive and go on to solve more mysteries? H-ll, yeah! There are sequels.
Posted by Caroline Lawrence at 8:49 PM 4 comments:

In a bid to raise awareness for Colchester's Roman Circus restoration appeal, local school children were invited to enter a competition to either write a mini saga in 50 words, or design a new version of Colchester's famous chariot beaker.

Here are the great winning entries of the mini sagas:
(remember, only 50 words allowed!)

A Day out at the Circus by Ceri A, Gosbecks Primary (1st)
The wind was rushing past my face as my snow white horses galloped at light speed. I could hear the chants of the crowd. I could smell fear in the air. I looked up, the finishing line was so close I could almost touch it. There it is! Yes! Winner!


A Day out at the Circus by Joseph K, St. Teresa’s Primary (2nd)
I’m in Camulodunum. My bones shaking, waiting for the start of the race. I could smell the blood of the previously unlucky charioteers. The quadrigas were off. Already I was needed, I ran forwards, hoping not to get hit, as the crowd shouted, “NAUFRAGIUM”. I picked up the unconscious slave.


A Day out at the Circus by Jessica A, Highwoods Primary (3rd)
I Augustus of Gaul, great chariot racer took part in todays race. The emperor was giving a gold laurel wreath to the winner. My horses flew into the lead leaving my wrecked enemies in pieces. As I received my prize the crowd cheered me on as if I was a god.


A Day out at the Circus by James T, St. Teresa’s Primary (Runner up)
I waited for the race to start. I could feel the tension rising. My hooves were raring to go. The fans’ cheers could be heard all across the track. The race started, my mane flew back. The sand spiralled away into the distance. I had won and was basking in glory.

And here are the winning beaker designs: 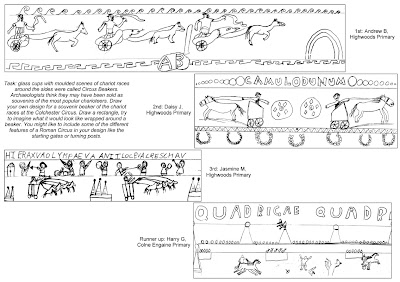 My fave is Jasmine's (detail below) for its bold lines, grinning and shocked gladiators (yes, gladiators sometimes battled in the Roman circus) and the wonderful metae (turning posts) found at either end of the spina. I also love that although Jasmine really looked hard at the beaker, Crescens becomes Creschav! lol. Well done, Jasmine! Well done, one and all!

For an exciting story that puts you right in the middle of the world of Roman chariot racing -- and tells you what naufragium means -- get The Charioteer from Delphi. Don't take my word for it. Read Juliette's review on Pop Classics Blog!
:-)
Posted by Caroline Lawrence at 10:32 PM No comments: