It’s not every day you come to the rescue of Robin Hood’s mum… especially not on the Appian Way. 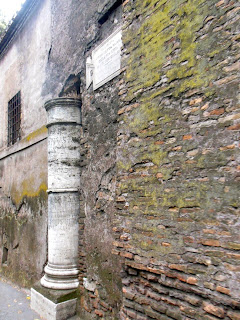 Agnes Crawford runs a bespoke tour company – UnderstandingRome.com – that takes people to the places she herself would like to see. Agnes grew up in London and studied Architectural History in Edinburgh. After university she travelled to Rome to teach English as a foreign language. She found a room in the fascinating part of Rome called Trastevere. One day she went to a friend’s birthday party and met an attractive Roman physicist. They married and she has now been in Rome for a dozen years.

Agnes first heard of me when some clever British children on one of her tours told her about my Roman Mysteries books.

I’ve been to Rome at least half a dozen times before in order to research my books. This time I’d been flown over courtesy of the American University of Rome to be their Writer in Residence for a week. I wanted to do something I’d never done before, so I tweeted Agnes and asked if she could give me a sample tour in return for lunch and a review. She replied with an enthusiastic yes.

We decided on the Appian Way and the Aqua Claudia. She calls this tour Roads and Water and it is one of her most popular itineraries.

Agnes usually gets a driver with a luxurious Mercedes but for our unofficial tour she picks me up in her sturdy range rover. 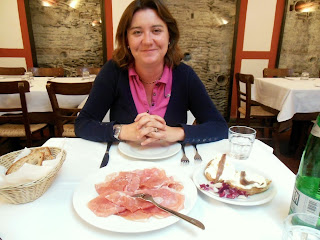 We go for lunch at a restaurant at the foot of Mons Testaccio, a mountain of broken potsherds located by the ancient docks of Rome. Amphoras which contained oil and wine could not be reused as the clay goes rancid. So they broke them up and made a big pile of them here. A BIG pile: Mons Testaccio means Potsherd Mountain.

Along the back wall of the Ristorante Flavio (what a good name!) are half a dozen glassed-over arches that let you look at a section cut into the mountain of shards. How fun is that?

After lunch of uniquely Roman food, we’re off to the Appian Way past the baths of Caracalla and the first milestone out of Rome. There’s a slight traffic jam here, for the ancient road is still in use, so Agnes takes a shortcut above (not through) the catacombs. 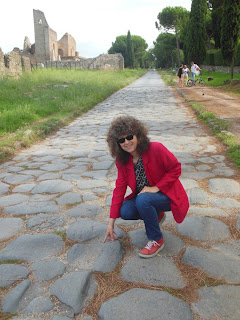 Finally we get away from the crowds to the part you always see on telly: the dove grey paving stones polished smooth by age, the flame-shaped cypress trees that always speak of graves and the lofty umbrella pines which host the creaking cicadas. Agnes is full of interesting facts and has all the dates at the front of her brain. She tells me the Appian Way first laid out by a guy called Appius Claudius (who should be far more famous than he is) and that it’s famous for being the route along which thousands of runaway slaves were crucified in the time of Spartacus.

Agnes is also an excellent source of fun gossipy facts, describing what the garden in an ambassador’s house looks like or revealing that another fabulous mansion was the setting for a scene of a recent movie. Someone who knows lots of Roman facts plus movie trivia is my kind of guide.

Agnes shows me the tomb of Metella, ruins of the bath house of Maxentius and the vast grounds of the Villa of the Quintilli which was so fabulous that Commodus confiscated it (Remember him? He was the evil Emperor from the movie Gladiator.) At one point we stop for photo op where you can see original Roman paving stones and cartwheel ruts.

We are back in the car and going slowly on account of the ancient and uneven nature of the road, when someone taps on the car window.

Agnes stops the car. It is a distraught German family consisting of a middle-aged father and mother in normal clothes, and their grown up son dressed as Robin Hood!

‘Scusi. Do you speak English?’ asks the mother. ‘A car came and took my handbag with my money in it.’

‘Was it just now?' asks Agnes.

‘Five minutes ago. They were in a small silver car.’

‘I saw him!’ cries Agnes. ‘We were driving and he came very fast. I thought: he’s going to have an accident. They were going towards Rome. The driver had very short hair.’

‘That’s right,’ says the father, who is on the phone to the police. ‘Is there a police station nearby?’

‘Yes,’ says Agnes. ‘Hop in and we’ll take you to Carabinieri at Capannelle, where my mother-in-law lives.’ 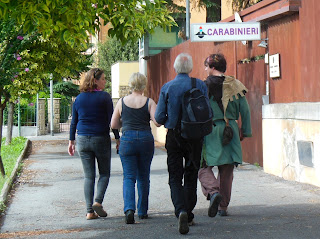 Gratefully, the three Germans pile in the back. I turn to the son.

I nod sympathetically. Some of my best friends are re-enactors and I have been known to put on a stola and palla myself.

Agnes drives Robin Hood and his parents to the Carabinieri and points them in the right direction.

Our good deed for the day accomplished, we drive on to the Aqua Claudia – a stunning stretch of aqueduct famous for appearing in the first scene of the most famous Italian film ever made: La Dolce Vita (The Sweet Life) by Federico Fellini. 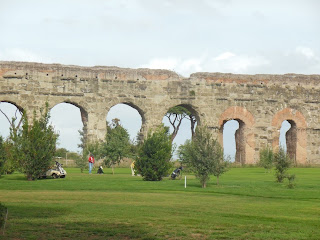 What used to be fields of wildflowers at the foot of the aqueduct is now a golf course. ‘Fellini appreciated the surreal aspects of Roman life,’ says Agnes. ‘He would approve.’

I am content. Agnes’ tour Roads and Water was all I hoped it would be: peaceful, atmospheric and fun.

Even if you don’t usually do guided tours, this one is worth it because you will visit places difficult to get to without a car.
And in Agnes you will have the perfect guide: one not only versed in fun facts and gossipy trivia, but a Good Samaritan as well.
Posted by Caroline Lawrence at 2:31 PM No comments: