Life in the Shade

My husband Richard and I are in Turkey for ten days, researching the penultimate book in the Roman Mysteries series, The Prophet from Ephesus. This book takes place in AD 81, when St John the Evangelist was still alive, and we're travelling with a tour which aims to visit the sites of the seven churches mentioned in the book of Revelation. These churches would have been flourishing around the time my book is set.

Today Pergamum (church 3) and Thyatira (church 4) are on the itinerary... 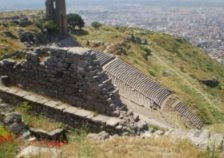 We set off for Pergamum just after 8.00am across flat, ugly, marshy ground, with factories spewing smoke. After half an hour the landscape becomes more pleasant, with fruit and olive trees. We are skirting the coast as we travel north and pass a pretty harbour with no houses but some big ships. Must be an industrial harbour. After an hour or so we are in golden hills studded with olive trees. The sea is still to our left, to the west. This was the area the Bible calls Galatia.

We pass a shaggy donkey by the side of the road and our coach slows to avoid a tortoise. We reach the site shortly after 10.00 in the morning. In ancient times, papyrus had to be imported from Egypt. The Anatolians from this area used sheepskin, instead, and we get the word ‘parchment’ from ‘Pergamum’. It is very hot, so we shelter in the shade of a big mulberry tree. The leaf of the white mulberry was the preferred food of the silk worm, but I prefer the fruit itself, picked right off the branch, sweet and sun-warmed.

The theatre here clings precipitously to the hillside. Was this what the writer of Revelation meant when he refered to ‘Satan’s Throne’? Probably not. He meant that Pergamum was the prime center of the emperor cult.

We scurry from the shade of the mulberry to the shade of a large fig tree. I’m sure that’s what ancient Romans spent most of their time doing: scurrying from one patch of shade to the next. That’s why Cicero’s term for the luxurious life of ease in Roman times was ‘life in the shade’, vita umbratilis. I imagine the scholar sitting in a breeze-cooled shaded colonnade, sipping chilled posca as he writes poetry or letters. 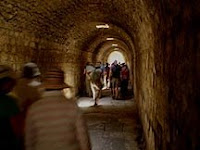 We hurry to the shade of a big plane tree while our guide informs us that there was a sanctuary to Asklepios here in Pergamum. Our guide calls it a health centre. There are lots of big green lizards here that throw their feet out when they run. I also hear the thin cry of a cicada or cricket and realise it’s the first I’ve heard. This is the only time I hear them on the trip, despite the heat. We leave the shade of the plane tree for the echoing coolness of a tunnel to the Asklepion. The sound of the cheeping sparrows is very loud here.

Our itinerary says we are going to lunch at the Caravan Restaurant, which sounds lovely, but we end up at a big new restaurant by the side of a busy road. Our lunch is flavoured with diesel fumes. But at least you can choose your own food. I have the delicious pickled red cabbage (Pliny the Elder would approve), white goat’s milk cheese and cold chicken. As usual, I only eat what Flavia and her friends would have eaten. I breakfast on olives, cheese and fruit and sometimes on yogurt with honey. Yum.

On our way to Thyatira, we pass through olive groves with the occasional dark finger of a cypress tree pointing to heaven. There are poplar trees everywhere, and beautiful red poppies in the grasses by the side of the road.

We make a ‘comfort stop’ at what seems to be a dreary service station. But we discover a wonderful lush grape arbour and a Turkish woman making stuffed pastry in a little kiosk. I love it when your expectations are confounded like this.

Thyatira is a fenced off square in the middle of a town, a scattering of fallen columns shaded by a pine tree, a palm, a pomegranate and an acacia. This was the Temple of Apollo, or the basilica, or both.

We head back to Izmir, passing through fertile fields and also past neat looking buildings for battery chickens. Our guide tells us something interesting. In England or America the farmer has a house surrounded by his fields. Here in Turkey, and the rest of the Med, the farmer lives in the village and commutes to his field. This makes me think of the passage in the New Testament when Jesus tells a parable about the farmer who builds a watchtower in his vineyard, so that someone can guard the fruit when it ripens. (Matt 21:33) The farmers’ modus operandi probably hasn’t changed in two thousand years.

On our way back to Izmir we pass through Manisia and traverse a pass through mountains forested with pines, birch and cypress. Ah! Life in the shade.
Posted by Caroline Lawrence at 9:38 AM