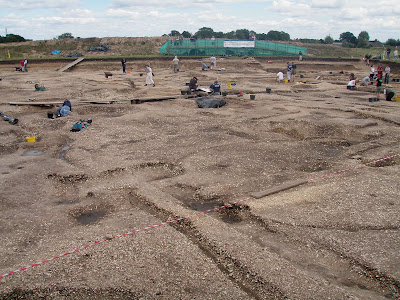 Calleva Atrebatum, AKA Silchester, was made famous by Rosemary Sutcliffe in her classic historical novel Eagle of the Ninth. In her forward to the book, she writes this. During the excavation at Silchester... there was dug up under the green fields which now cover the pavements of Calleva Atrebatum, a wingless Roman eagle, a cast of which can be seen in the Reading Museum. Different people have different ideas of how it came to be there, but no one knows, just as no one knows what happened to the Ninth Legion after it marched into the northern mists... 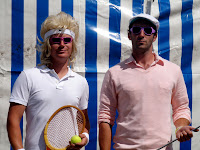 On Saturday 18 July 2009, the University of Reading held one of its two annual Open Days at the site. (The second Silchester open day will be held on the 2nd of August, but the site is also open to visitors 10-4:30 every day except Fridays.) It was a perfect day. Sunny, with a cool breeze and fluffy clouds. The crowds poured in. Archeology students at the University of Reading who are digging on the site were encouraged to dress up... and it didn't have to be Roman. 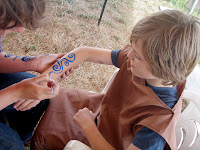 There were tours of the site for adults and for children. Children could also try digging and recording grids. They saw a garden with Romano British plants and learned how to wash finds. Some of the most exciting artefacts were on display. Brooches, keys and coins. Kids could even get a Celtic tattoo (like Joseph, right).

My brilliant pal Hella Eckhardt (below in the blue shirt) invited me to come do some talks at the Open Day. Hella is a lecturer in the department of Archaeology. She is doing research on isotopes which prove that people came to Britannia from all over the Roman Empire. She gave me three lovely helpers, enthusiastic young archaeology students named Lydia, Laura and Zoe. They told me how much they loved being archaeologists.


When you first see the site, it looks like a big dirt field with lots of confusing holes and trenches, but when the site director Amanda explains it, it comes alive. Amanda's nephew Felix (below) is a top fan of the Roman Mysteries and he had brought a bagful of books for me to sign. He was brandishing a big wooden sword so you can bet I signed them cheerfully and without complaining.

I did the kids' tour, because they always tell you about the interesting things like toilets and food. After lunch I went up to the church (built on the site of a temple) and gave my talk called 'How to Write a Roman Mystery'. Thanks to Hella it was very well attended and I met some wonderful fans and scholars both young and old!

At the end of the day, Laura and Zoe showed me the Roman amphitheater. Apparently the male diggers play extreme frisby here on their free afternoons and the girls sit on the verge and cheer. 'Why don't you play, too?' I ask my lovely and vivacious guides. 'Oh,' says Zoe, 'They get very competitive and quite fierce.' After a long day of digging and their games of extreme frisby, the young archaeologist go to the local pub which provides special 'Diggers' Dinners'. 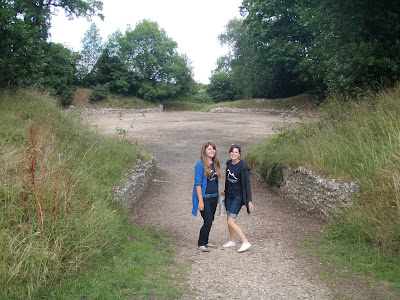 If you like history, camping, pub food, digging in the dirt and extreme frisby, then archaeology is obviously the career for you!

For more info on Calleva Atrebatum check out my blog entry on Roman Silchester from two years ago!
.
Posted by Caroline Lawrence at 8:51 PM