I am currently writing a book about the most beautiful boy in the world in the year AD 96. In my book, everyone keeps calling him ‘Adonis’. That’s because in the Graeco-Roman world that name was synonymous for a beautiful youth. We still call a very good-looking young man ‘an Adonis' today. In Greek mythology, Adonis was so beautiful that he was loved by the Queen of the Underworld (Persephone), by Hercules(!) and by the goddess of love herself: Aphrodite (AKA Venus).

Have a look at the painting by J.W. Waterhouse, below. What do you think is happening? 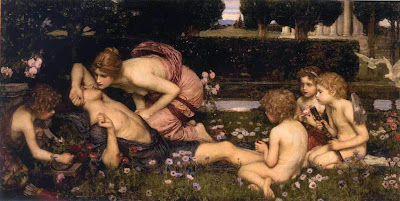 At first glance it looks like Sleeping Beauty with the genders reversed, doesn’t it? As if a beautiful youth is stretching and waking up having just been kissed by a pink-clad nymph. But the painting is telling a much sadder story. The youth is Adonis and he is dying. The woman crouching over him is Aphrodite herself and her Cupids are giving us clues. Ovid wrote about Adonis in his Metamorphoses, but it seems Waterhouse found more inspiration from a Greek poet named Bion who probably lived in the first century BC.

Bion’s Lament for Adonis also inspired Percy Bysse Shelley, the famous Romantic poet, whose poem Adonaïs may have influenced the writers of Star Trek when they called episode 31 ‘Who Mourns for Adonais’ (below) 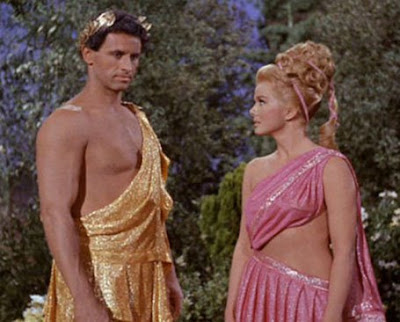 There are several versions and variations of the original Adonis myth, but here is the basic story. The beautiful youth Adonis loves to hunt and when Aphrodite begs him not to go, he just laughs. But Aphrodite’s worst fears are realised one day when a fierce boar gores Adonis in his upper thigh. Ovid, never one to pull his punches, tells us he was pierced in the groin. (ouch!) As Adonis lies bleeding to death, Aphrodite hears his groans and comes running. As she bends down to kiss him, she catches his dying breath.

‘Wake up, Adonis, for just a moment more, and kiss me one last time! Your briefest kiss will last my lifetime. I want to taste your inmost soul in my mouth and my heart, to breathe your last breath, to drain your sweet love-potion, to inhale all your love.’

Bion describes Adonis’s purple garments, his white thigh struck by the white tooth, the cries of Echo, and the crowd of mourners - hunting dogs, nymphs and Loves (Cupids) - who attend the dying youth. According to Bion, one Cupid treads on Adonis' arrows, another on his bow, one loosens his sandals, one brings water in a golden bowl and one fans him with his wings. Waterhouse has left out Echo and the other the nymphs, as well as the hunting dogs, but he has included the Cupids with a few changes. For example, in Waterhouse’s painting the only winged Cupid is shown blowing out a torch, to symbolize the extinguishing of life.

Bion says the drops of blood become roses and Aphrodite’s tears become anemones. That is another clue that Waterhouse was reading Bion as well as Ovid, who only mentions anemones. (If you don’t know what an anemone looks like, just look at Waterhouse’s painting. They are red and pale lavender.)

It’s too bad this was not one of the paintings on display at the Royal Academy. I would love to see it up close.

P.S. I have also blogged about Waterhouse’s interpretation of the myths of Narcissus, Hylas, Ariadne, Circe, Odysseus and also about Orpheus and the French film Orphée by Jean Cocteau. I even penned an Ode to Orpheus inspired by the Waterhouse painting Orpheus and the Nymphs. I even found out that the model for Adonis might have been an Anglo-Italian teenager living in Fulham London in the late 1800s. 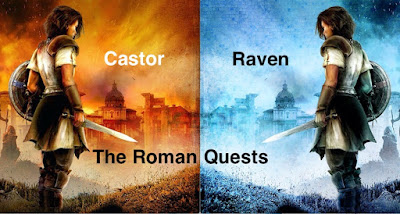 P.P.S. I ended up writing different books called The Roman Quests. But beautiful ‘Adonis’ appears in those books. He calls himself ‘Castor’ and when he is 13 he discovers he has a twin brother who was kidnapped in infancy, grew up in Britannia and calls himself ‘Raven’.

[My Roman Mysteries books are perfect for children aged 9+, especially those studying Greeks & Romans as a topic in Key Stage 2. The glossy BBC Roman Mysteries TV series did adaptations of some of these books. They are available in the UK and Europe on DVD.]
Posted by Caroline Lawrence at 11:51 PM