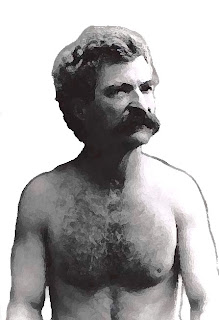 by Caroline Lawrence, author of the Western Mysteries

I was reading Paul Fatout's Mark Twain in Virginia City the other day and came across this interesting observation: 'Among the many pictures of Mark Twain, not one is smiling...'

I looked through my own archives and found that indeed, there seem to be no pictures of Mark Twain smiling. How surprising for America's foremost humorist, dry humorist notwithstanding...

One explanation might be that Twain's bushy mustache - adopted in around 1864 - hid any upturning of the corners of the mouth.

Another explanation might be that like certain actors of the 60's - the 1960's, that is: not the 1860's - he had bad teeth and was loath to expose them. My dad once told me that is why the French actor Jean-Louis Trintignant rarely smiled.

Or do I detect a scar on the right upper lip in this photo of him still in his teens? Where did he get the scar? Was it an embarrassing reminder of something?

Another explanation might be that Victorian subjects did not often smile for photos.

However, neither did they take off their shirts to reveal manly, hairy chests.

When I tweeted for help, asking if there really were no pictures of him smiling, @TwainHouse came up with the startling image at the top of this post. (I have used my usual photoshop filter to make it look more striking. You can see the original, undoctored image HERE.)

Now I know that American photographers of the 1860s - 1890s often photographed corpses and bawdy girls, but never have I seen a topless literary lion like Mark Twain.

Had he just emerged from a hot mine? Or a hot bath?

Was this a medical picture for the benefit of his doctor?

Was it a romantic Valentine's Day photo for his wife, Livy?

Was it because he lost a bet? Or won a bet?

One clue might be the date of the photo.

@mtpo, the Mark Twain Project at the Bancroft Library in Berkeley, say the photo was taken in 1884 by Towlueson in Hartford, Connecticut. What was Mark Twain doing in 1884? According to the excellent TIMELINE at Mark Twain House, he was on a lecture tour. Huckleberry Finn was to be published in the last month of that year. Could it be that Mark Twain decided to take his own raft trip down the Mississippi?

In the meantime, I can't help recalling one of Mark Twain's funniest quips: 'Clothes make the man. Naked people have little or no influence on society.'

[The Case of the Deadly Desperados features the 26-year-old reporter Sam Clemens who will soon  take the nom de plume Mark Twain. This Western Mystery for kids aged 9 - 90 is available in hardback, Kindle and audio download. It will be published by G.P. Putnam's Sons in the USA in February.]
Posted by Caroline Lawrence at 11:30 PM