A Day in the Life of a Roman Girl

Flavia Gemina, 10, is an amateur detective. She lives in the Roman port of Ostia with her father Marcus Flavius Geminus, her ex-slave-girl Nubia, her tutor Aristo, two slaves and two dogs. (This interview was given in November AD 79) 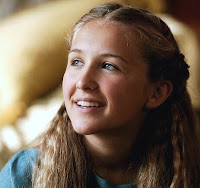 My dog Scuto wakes me at sunrise. He presses his cold nose into my face and I open my eyes to see his face looming in a big, panting grin. If I've been up late the night before, I roll over and go back to sleep. Scuto knows it's no good trying to wake me if I'm tired, so he goes downstairs to help our cook Alma prepare breakfast. She goes out to buy bread at cockcrow and is usually back by dawn.

Presently I hear music - the sound of flute and lyre. Nubia usually practises with my tutor Aristo first thing in the morning. Nubia's about 11 - a little older than I am. She used to be my slave-girl but she saved my life so many times that finally I set her free. She still lives with us though. Now she's like my dark-skinned sister. If Scuto doesn't get me up, the music does.

Nubia likes clothes and jewellery but I'm not too bothered about all that. I lace up my sandals and slip on any old tunic, a short one in summer and a long one in winter. Then I go downstairs. Our house has a secret garden inside: nobody on the street can see it. In the center is a fountain. I splash some water on my face and have a drink. Then I use the latrine. This month it's my job to empty the latrine bucket every morning - but that's another story.

We all eat breakfast whenever we come downstairs: usually a warm poppy-seed roll and a piece of cheese in summer and a hot poculum made of spiced wine mixed with milk in winter.

By the time I appear, pater is usually up and at work in his study, preparing for the day ahead. He calls the whole household together into the atrium and we watch him make the daily offering at the household shrine. It might be a honey-cake, or a piece of fruit, or a hyacinth-scented candle. Just something to keep the household gods happy. My father didn't used to be so pious... but that's another story.

After morning prayers, pater goes out: to the barber first and then to call on his patron. Then he goes to the harbour to work on his ship and do whatever a captain does when he's not on a voyage. Of course he's home at the moment because the sailing season is over; it won't begin again until late April.

After pater leaves, about an hour past dawn, Jonathan and Lupus come over for lessons. Jonathan is my next-door-neighbour. He's Jewish. We became friends after he saved me from some wild dogs... But that's another story. I like Jonathan because he makes me laugh.

Lupus is a boy we discovered once in the necropolis outside the town walls. He has no tongue and can't speak. He's a bit wild but very clever. He learned to read in less than a month and now he can write, too. We think he's about eight or nine years old.
Lupus lives with Jonathan at the moment and they have lessons with me and Nubia. Jonathan's father Mordecai and my father came to some arrangement. I think Mordecai gives us free medical care in return: he's an excellent doctor.  Jonathan's older sister Miriam used to attend lessons with us, but now she's preparing to get married. She's fourteen and the most beautiful woman I've ever seen.

Aristo is a brilliant tutor. He's young and Greek and very handsome. (When I was younger I wanted to marry him, but now I'm too mature for such childish ideas.) He teaches us Latin literature, Greek language, mythology, philosophy and maths. Ugh! I hate maths. I hate it almost as much as I hate emptying the latrine bucket.

Lessons last until noon, when the gongs announce the opening of the public baths. Then we have a light lunch of bread and cheese and olives. Afterwards the adults take a siesta or go to the baths. That's usually when we conduct our investigations. But during the winter months - like now - Nubia likes to go to the baths, too. She says the only time she feels warm is in the hot, dry laconicum or the steamy sudatorium.

Pater usually goes out to dinner about four hours past noon. He dines with his patron or one of his friends. In that case, Nubia and I have something light with Alma and Caudex. (Caudex is our door-slave and sometimes my bodyguard.) Occasionally pater entertains at home and sometimes we are invited. We never recline - well, only at the Saturnalia. We sit at a table in the middle of the triclinium while pater and his friends recline on the three couches around us.

We go to bed at sunset, or shortly after, which is nice in the summer but very frustrating in the winter. Alma says it's bad for my eyes, but sometimes I smuggle a scroll up to my bedroom and read by the light of my little clay oil-lamp. My favourite scroll at the moment is one by Apollodorus. He tells lots of Greek myths. I finally fall asleep and dream that I'm going on a quest with Jason or helping Hercules complete his tasks. My dreams are always in colour and they are very exciting. But they are never as exciting as my real life!