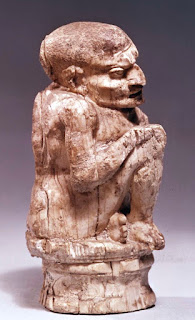 When I was invited to do a new translation of Aesop’s Fables, I was thrilled. It was like opening a window into daily life in ancient Greece. Talking animals and walking gods aside, the stories are full of detail about ancient family life, agriculture, religion, education and travel. They also cast a light on the ancient mindset, something much more elusive. But some of the people and objects from those long-ago times need illustrating, so we can visualise them. Here are a few images to help us ‘see’ that ancient world. 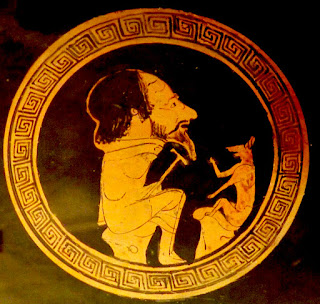 Aesop lived so long ago that some even question his existence. Others say he was born around 620 BCE and died perhaps sixty years later. This is the inside of an ancient Greek kylix (wine cup) now in the Vatican Museum. It shows a bearded man in a cloak apparently conversing with a fox. Because the subject matter is so unusual many have assumed it must show Aesop who told fables about talking animals, especially clever foxes. The first thing we notice about the man – apart from the fact that he is listening to a fox – is his abnormally large head. Most men on Greek vases are usually shown with idealised beauty; this man has wrinkles on his brow, a big nose and a scruffy beard. An ancient biography of Aesop tells that he was hideously ugly and possibly a hunchback like the image at the top of this blog, a small ivory figurine in the British Museum. Maybe that is why on this cup his body is so small in relation to his big head. That may also be why his staff looks like a crutch. This kylix is usually dated to about 460 BC, so if it does show Aesop then it is our earliest representation of him in any form. The first written mention of him is by the historian Herodotus around 425 BCE, at least a generation later.

2. The Cloak and Staff 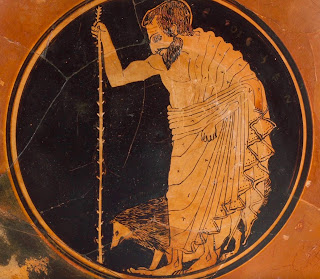 I have a crazy theory that this ancient Greek kylix now in New York shows Aesop with a hedgehog. I may be wrong. It may not be Aesop. It may not be a hedgehog. Scholars have suggested that the mystery animal could be a dog, a pig or even a porcupine. But notice how the man is dressed. He is wearing a himation, a cloak like a tablecloth or blanket. Judging from many Greek pots and sculptures, some men wore only this cloak and nothing else. The cloak and walking stick became a kind of uniform of rich, upper class men in Ancient Greece. Many philosophers are shown with a cloak and staff. Some philosophers, like Socrates and Diogenes, famously went barefoot like the man on this cup. The ancient biography of Aesop tells us that he was born a slave, but eventually won his freedom and became famous. Like many philosophers and sophists (the ancient version of motivational speakers) he went on tour, sharing his wisdom with others.
3. Different types of Tunics 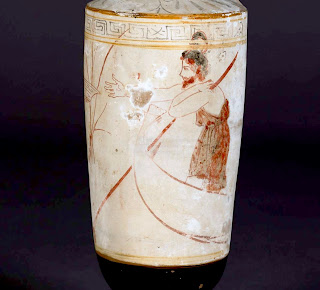 Younger men and those who had to work for a living often wore a tunic instead of a cloak. The tunic, called a chiton, was like a long T-shirt of linen or wool. One type, called the ‘exomis’ left one arm and shoulder uncovered and was favoured by workmen like blacksmiths and potters. Or you could roll down the upper half of your tunic and make it into a kind of kilt. This lekythos (funeral oil-jar) now in the British Museum shows Charon, the ferryman of the dead, in a red exomis and strange crested cap. 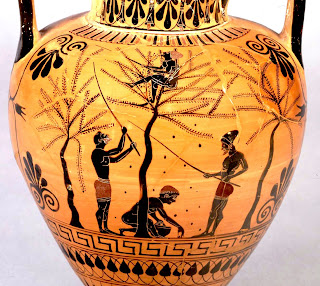 In ancient Greece many men wore no clothes at all, even in public. Working men like fishermen and potters may have gone completely naked. Rich men who had time to exercise often did so naked at a place called the Gymnasium, which comes from the Greek word ‘gymnos’ or ‘naked.’ In sacred games like the Olympics the athletes competed in the nude. Because women mainly stayed in the home, men could run around naked more easily. Imagine the hot Athenian marketplace full of naked men, some of whom wore the T-shirt like tunic or the tablecloth-like cloak. One of my favourite Greek vases, a black-figure amphora (two-handled storage jar) in the British Museum, shows men and boys harvesting olives by beating the tree and shaking the branches. The men wear their purple tunics with the tops rolled down and the boys are naked! 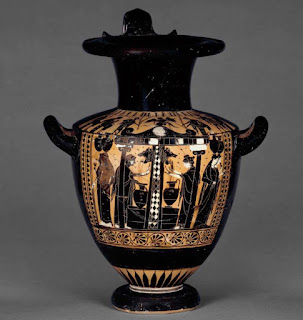 Greeks had dozens of different types of ceramic pots, each for a different purpose. This black-figure vase in the British Museum is a hydria, a jar for holding water. Suitably, it shows women and girls fetching water from the public fountain. It also shows what women wore: a long tunic with an outer tunic and/or a shawl or mantle, the female equivalent of a cloak. You can see some of the girls have pads on their head to cushion the weight of the heavy hydria full of water that they balanced on their heads. Although there are lots of female animals in Aesop’s Fables, women and girls hardly appear at all. The realm of women was the household, where they would cook food, weave cloth, raise children, tend domestic animals, command their slaves and avert evil spirits. 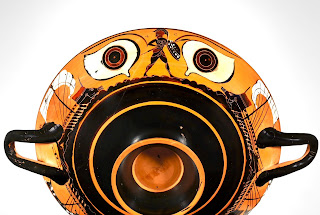 In ancient times, many people believed that when you looked at something, tiny beams made of fiery particles flew out of your eyes. That was how you could see. That’s why Jesus says ‘The lamp of the body is the eye.’ Matt 6:22. If you looked at someone the beams from your eye touched them. If you looked at someone with envy, malice or anger it could hurt them, possibly because your look allowed in evil spirits. That is why people used amulets confusingly called ‘evil eyes’ to reflect back this ‘evil eye’. Such images and amulets are ‘apotropaic’ which means they ‘turn away’ evil. An Evil Eye amulet might have a pictures of eyes or a scary face. The face of Medusa is called the gorgoneion. A scary mask is called a mormolukeion. This kylix in New York is doubly apotropaic. It has medusa on the inside and eyes on the outside so when a drinker raised it to drink the eyes would seem to gaze back, averting any evil spirits or reproachful looks from other diners. 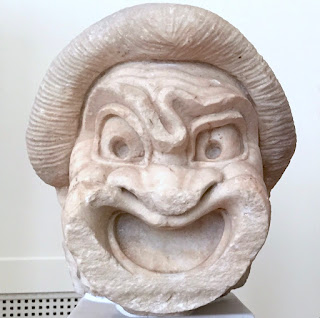 Most ancient Greeks and Romans believed in a world full of gods, demi-gods and spirits. Some were good and some were bad, but they were everywhere. You could distract the malicious spirits with complicated borders on clothes, the sound of bells or nasty smells. You could frighten them away with scary faces or animals. Stone masks like this one from Athens were obviously not worn by actors, nor were the scary masks shown in frescoes and mosaics. They were meant to scare away evil spirits. Amusingly, they were also used to threaten children, like a bogeyman. Ugly Aesop tells a slave dealer that he could be a ‘mormolukeion’ to frighten children into behaving. And later he says he can be a walking talking evil eye. 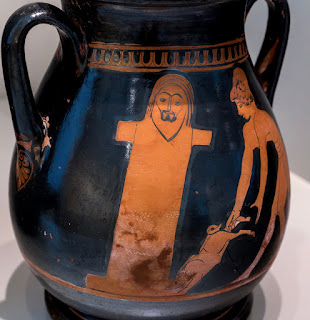 The Greek gods frequently appear in Aesop’s Fables, especially Zeus and Hermes. Zeus is portrayed as a mainly benevolent creator god, like the father of a household. Hermes is his messenger and errand-runner, a bit like a son who is old enough to drive. The name Hermes is naturally linked to the word ‘herma’ which was a square pillar of stone used to mark boundaries and crossroads and protect them against evil. Sometimes the carved stone head of a deified hero like Heracles or the god Hermes was placed on top of these herms to make them even more protective. This pelike (jug) now in Berlin shows a young man bringing a pig to a herm. An image of your favourite god or hero might also protect your house from evil. In Aesop we see people buying statuettes of gods to put in their homes. They would lay an offering such as a candle, cake or flower in front of the statue. They might also pour a libation, a little bit of wine or oil, at its feet or at the base of the altar or niche in which it stood. 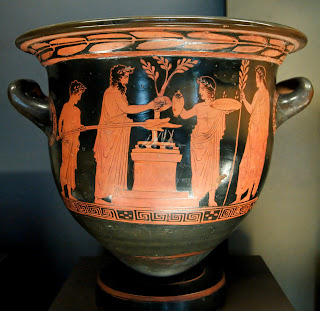 People had jobs then that we do not have today. A charcoal burner made charcoal from wood. A fuller cleaned clothes using urine and sulphur smoke. A fowler caught birds using sticky birdlime smeared on twigs, then sold them to people to eat. Professional mourners were women who helped families grieve their dead by wailing and beating their breasts. An orator was a public speaker, usually an upper class rich man who defended people in law courts for free as part of his career in politics. A sophist was a combination philosopher and orator, like a motivational speaker. A temple priest knew how to sacrifice a live animal and put certain bits on the altars to various gods. A soothsayer would look at the internal organs of a sacrificed animal and tell whether the gods were for or against a certain course of action.  This red-figure krater (wine mixing bowl) now in the Louvre shows a priest and his attendants at an altar. The priest seems to be holding an internal organ while one of his helpers pours a libation (drink offering). Another helper is roasting meat over the flames on the altar. Apart from the garlands on their heads, the priest and his attendants wear only cloaks. 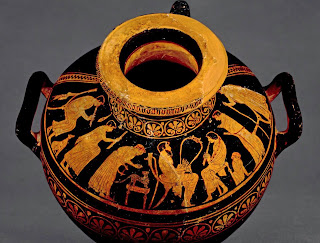 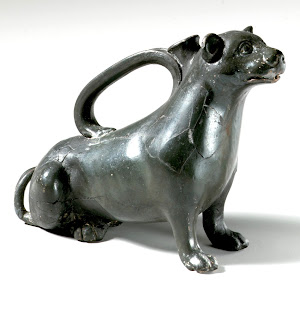 Speaking of cats and dogs... Although dogs were extremely popular, some scholars think cats were rare in ancient Greece and that people often kept stoats or weasels instead to keep down the mice. Aesop seems to confirm this for he has several fables about stoats. The fable about the mice ‘Belling the Cat’ was added much later, in medieval times, so in my retelling I call it ‘Belling the Stoat’. This black-glazed askos (jar with handle) from about 400 BCE shows a charming stoat (or weasel). Another unfamiliar animal was the onager, also known as a wild donkey. Onagers could not be tamed. They were so fierce that people caught them and forced them fight other wild beasts in the arena. A cicada is a small insect like a cricket that features in several of Aesop’s fables. They are the tiny creatures who make the rhythmic creaking noise you hear in Mediterranean countries on a hot afternoon. 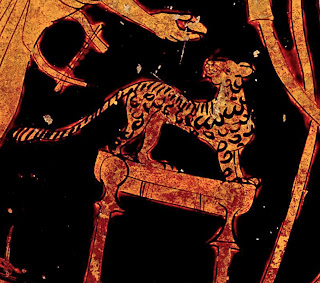 In this post I’ve tried to give you a quick glimpse of what Aesop’s world looked like. But while I was translating the fables the message that came through to me over and over is this: It is not the outward appearance but the inner nature that is important. Hideously ugly Aesop became a success because of his wit, bravery and sense of humour. One of his fables sums this up beautifully. It is the story of the Leopard and the Fox. A fox and a leopard were disputing about which of them was more beautiful. ‘Look how beautifully I am adorned!’ said Leopard. ‘See how varied and delightful is each one of my spots!’ Said Fox, ‘Too bad you cannot see how varied and delightful is each one of my thoughts! Your beauty is only of the body, my beauty is of the mind.’

We hope the retelling of Aesop's Fables will be out in Autumn 2022, illustrated by the wonderful Robert Ingpen. In the meantime you might enjoy my book Adventure in Athens about a couple of kids who travel back to ancient Greece during the time of philosophers, sophists and policemen in striped pyjamas.

Posted by Caroline Lawrence at 11:26 AM