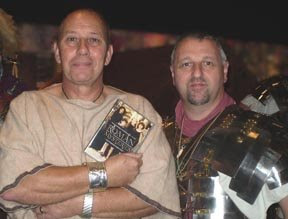 The Museum of London is celebrating Roman London today with re-enactors, talks, demonstrations, competitions and drama in an event called Londinium!

Inside the main entrance, in the London before London foyer, several members of the Leg II Avg have set up a leather tent with all their Roman soldiers' equipment. They do drills with children and let us peek inside the tent. I see legionaries David and Simon (above) as well as Lyndsay and Thomas.

Gladiatrix and sometimes slave-girl Alisa shows slave chains and collars and almost makes one boy sick when she described how doctors took arrows out of wounded soldiers. Marcus Londinium Cato (AKA Cockney John) also gets to make people queasy when he brandishes a piece of nasty-looking medical equipment and is asked 'What's a hemorrhoid?' 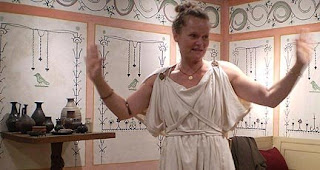 In another part of the gallery, Roland Williamson is showing how Roman shoes are made. And dramatic interpreter Kate (above) has taken on the persona of freedwoman Martia Martina, who was taken from Caledonia aged 8. She is very funny, pretending to think people with only one name are slaves and not understanding what chips are. 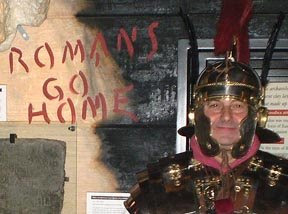 It is a beautiful day so I wander outside to eat lunch and to watch parents and children happily have a go at working a Roman waterlifting machine. After my stuffed dormouse, I go back inside to admire the small but select collection of Roman objects in the museum. I've seen the collection many times but always find something new. I also have a surreal moment when I spot legionary Marcus Londinius Cato (above) also exploring the collection.

I finish my visit with a guided tour of the Roman wall outside the Museum. It was built in around AD 120, and used to be part of the fort in the north west corner. Our group gets to see part of the wall which is usually closed to the public. Appropriately enough, it's underneath the road known today as 'London Wall'.

P.S. Watch Roman Mysteries season 2 Sundays on CBBC at 9.30am.
Posted by Caroline Lawrence at 8:03 PM