The British Museum is one of the best resources in the world. Today was Roman World Day, with storytelling, workshops, demonstrations, films and talks, many linking with the current Hadrian Exhibition. 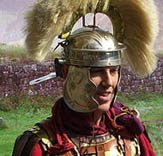 I arrived just after noon, to find some of the legionaries from the Leg II Aug already outside and chatting to tourists. They had pitched a leather tent in front of a beautiful mural of Hadrian's wall and they looked great with their armour gleaming in the sunshine. All the re-enactors put in very long days but they are always cheerful, enthusiastic and helpful. Inside I found more re-enactor friends in the atmospheric Great Court. There was Nodge, who made my first sponge-on-a-stick, his wife Janet (with a wonderful Roman rag doll) and their daughter Helen, too. Gus the auxiliary was on duty, with his Phrygian cap and later with his bow and arrows. There was a Roman food lady and a Roman tempura painter and Helen the seamstress. Chris the potter and his lovely daughter Rebecca were present, too. Plus some 'exotic dancers from North Africa'.

Gaius the scribe was there, too. He presented me with a beautiful papyrus scroll of Horace's ode, the one with my favourite Latin motto: Carpe diem or 'Seize the day'.

While I was going around the stalls of the re-enactors, I met several young fans... just by chance. One of them, Xavier, actually had a battered copy of The Secrets of Vesuvius with him. I also met Sam, who has read all my books, and his sister Matilda. Sorry if you were there and I didn't see you!

Later, I dropped in on some of the readings and lectures. I listened to David Stuttard telling about Roman love poetry in the late Republic and early Empire. He had an actor with him to read some of my favourite poetry, including 'Odi et amo' by Catullus. I also heard Sally Pomme Clayton give an enthusiastic reading of Ovid near the base of a column from the famous Temple of Ephesus. The Emperor Hadrian was there, too, fielding questions from fans young and old. These talks took place all over the museum - in places I don't always go - so I discovered and re-discovered some of the wonderful artifacts and works of art in the BM.

After an hour or two, I went outside to enjoy the sunshine with dozens of other tourists. It was a perfect English day, sunny with fluffy clouds and a cool breeze. I resisted going to my favourite Starbucks across the street from the British Museum, and nibbled on a piece of cheese washed down with diet Coke. Yum.

After my lunch I went back inside for a talk on Roman cooking by Valentina Daprile from Carluccio's. She didn't know as much about Roman food as expert Sally Granger, but the food she prepared was good Italian food and might have been like something known to Flavia and her friends. Valentina made a gustatio (starter) of porcini mushrooms with truffle and olive oil; a mensa prima (main dish) of pork with herbs, apples and honey; and a mensa secunda of sheep's-milk cheese with honey and nuts. Yes, the Romans loved their honey.
Posted by Caroline Lawrence at 10:05 PM