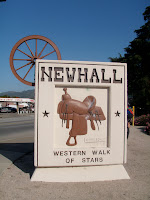 Santa Clarita Valley, on the outskirts of LA, is like Hollywood's back yard. It has been used for films since the beginning of the film industry in Southern California. Some have even dubbed this area "Newhall-ywood". (Newhall is one of the several towns that make up the city of Santa Clarita.) The 55 of us who had booked the tour met at Heritage Junction, the old Railway station. There we watched a few clips from movies filmed at the station itself (e.g. Frank Sinatra in Suddenly, Charlie Chaplin in The Pilgrim and John Cusack in The Grifters) as well as scenes from the surrounding area. The most popular clip was that of Kirk fighting a Gorn at Vasquez Rocks, from a Classic Star Trek episode, Arena. After the clips, we filed out to the waiting bus, popping our tickets into a spittoon & getting a brown bag snack in return.

Our guide was E.J. Stephens, a knowledgable and enthusiastic lecturer from the Santa Clarita Valley Historical Society. We spent an hour at the NCIS set at Valencia Studios then another two hours driving around the hills while E.J. pointed out features of interest.

Here are fifteen fascinating facts I learned from the tour:

1. Apart from Melody Ranch (the venue of the Cowboy Festival) there are dozens of other film ranches and studios dotted around Santa Clarita: Valencia Studios, Blue Cloud Ranch, Sable Ranch, Disney's Golden Oak Ranch, Firestone Ranch, to name a few. Many residents are totally unaware of their existence. 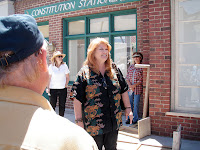 2. NCIS is filmed at Valencia Studios. Set designer Lynn Wolverton Parker generously spent an hour showing us the sets and props, which was fun for fans of the series.

3.The final sequence in the very last silent film was shot on the Sierra Highway: Charlie Chaplin and Paulette Goddard walking into the sunrise in the film Modern Times.

4. The hit TV series Justified is not filmed in Harlan County, Kentucky, but right here at Santa Clarita Studios.

5. The high school in Pleasantville is Valencia High School.

7. Some scenes of Twilight (those meant to be Arizona) were filmed in and around the Hyatt Valencia.

8. The Halfway House Cafe (halfway between L.A. and Palmdale) has appeared in so many films that they have a whole page of film clips and stills on their website.

9. The Birds actress Tippi Hedren has a big cat sanctuary called Shambala in the hills. Sometimes you can catch a glimpse of lions on the metrolink train just before it gets into Palmdale.

10. The famous Vasquez Rocks are named after a bandit who hid out there for a while. He was later hung.

11. The man in the Gorn suit is named Bobby Clarke and still lives in Santa Clarita.

12. There is a gibbon preserve up in the hills near Vasquez Rocks.

13. Steven Spielberg filmed most of his first movie, Duel, on the roads around Santa Clarita Valley. At the end of the film, the demon truck falls over dramatic cliff at Mystery Mesa on Agua Dulce Movie Ranch. 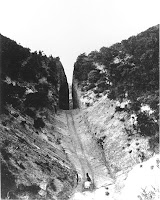 14. Mystery Mesa has also featured in Iron Man, Thor, etc. According to E.J., it was saved from development thanks to the presence of "sea monkeys", an amazing type of brine shrimp that can lie dormant for years until water is added and they revive. If a film-maker ever needs a handy cliff, that's the place to go.

15. Beale's Cut (above) was is a deep cut in a pass made by Phineas Banning in 1854 as part of a road he built to provide service to Fort Tejon. Originally made for real stagecoaches, it appears in the 1939 John Wayne film Stagecoach and many others. Today it is on private property.
Thanks to E.J., his wife Kimi, Lynn Wolverton Parker, the organizers at the Cowboy Festival and the Santa Clarita Valley Historical Society for a great tour!


Posted by Caroline Lawrence at 12:13 AM