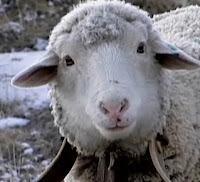 This is my Western decade, and I'm embracing it in every way I can. That's why my ears pricked up when I heard one of my favourite film podcasters praise a documentary about sheep farming in Montana. Then last week I went to the Renoir Cinema in Bloomsbury to watch Meek's Cutoff and they showed this charming trailer for the film that had piqued my curiosity last year: Sweetgrass.

The scenes in the trailer are the opening scenes of the film and that is what brought me back to the Renoir three days later for a screening of Sweetgrass followed by a Q&A with one of the filmmakers. Lucien Castaing-Taylor is a thoughtful, bearded Englishman now based out of Harvard. He introduces the film by warning us that we are in for two hours of sheep with no talking. In fact the film is well under two hours and there is plenty of dialogue between the two main shepherds. But yes, it is mainly watching sheep from the time of shearing through lambing through taking them up into the mountains for the summer and then bringing them back to a holding pen near the train tracks, so they can be shipped off for slaughter.

One of my favourite scenes can be seen in the trailer. In the farmyard, the shepherd rises up on the horizon and calls his sheep. They slow down, turn, one or two of the most clued-up start towards him. Soon a great, woolly, bleating, adorable mass of them flock after the shepherd. Ah. Bless. They know his voice. Just like Jesus says: "My sheep know my voice." Oh, wait. There's a tractor behind them, urging them in the right direction. Lol.

As they swarm after him, the sheep baa enthusiastically and loudly. There is something wonderful about the sound of sheep. They say "Baaa!" but they say it just like a human. It is comical and endearing.

It's no wonder that in the New Testament, 23.5% of Jesus's parables (my guestimate) have to do with sheep. We identify with them. We like them. They are woolly headed, thick and usually hungry. They like to clump together. But they can be ornery critters and spread out, when the mood takes them. Just like us.

In the Q&A after the film, Lucien is his own worst critic. He says the first 20 minutes of the film are the best. They are, but there are some gems in the following hour or so. He says the sound is too rich, dense, textured and dramatic. I think he's wrong on that score. The sound is wonderfully done. Especially when he shows us stupendous wide angle vistas but we can hear John grunting, muttering and urging his horse Jake to "watch your step". And the intense sounds put us right there in the Beartooth Mountains. 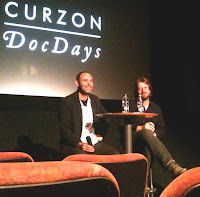 In a throwaway comment, Lucien mentions that the shearing scene is distressing for the viewer. Again, I disagree. You can clearly see that the sheep quietly submit to the firm, confident grasp of their shearers. There is something wonderful about seeing the shaggy outer layer sheared off; each swipe leaves a textured track and the sheep look like courdouroy when they're pushed out into the watery spring sunlight. Then the filmmakers poignantly cut to a shot of the newly-sheared sheep standing miserably in a spring snowstorm and the camera holds on them for several minutes. They do not complain, but one of them looks accusingly out at us. That's the distressing scene.

Some of the questions the audience put to Lucien were about the two main shepherds, craggy old John and peevish Pat. Lucien almost batted aside the question, saying he wanted the focus of film to be on the sheep, not the shepherds. I'm with the filmmaker on this one. The humans are prosaic. It's the sheep that are poetic.

People don't usually identify with cattle (unless we're on a crowded tube train) but we do identify and empathise with sheep, and this gives the whole idea of a Western "cattle drive" a new twist. Instead of identifying with the "cowboy" we identify with the critters they are herding. We are the flock being driven, trusting that our shepherd will be patient and loving like Jesus, not angry and frustrated like Pat, who at one point descends to a profane rant that would have Deadwood's Al Swearengen blushing. Pat is tired and bored and sick of sheep and his knees are giving out. At one point this middle-aged man makes a mountaintop phone call to his mother and nearly dissolves in tears. It's not pure self-pity: he's upset because his beloved sheepdog has bleeding paws and his horse is nothing but "ribs and bones".

The myth of the Western is the myth of freedom and choice and the loner riding off into the sunset. And as you watch Sweetgrass you realize that's just what it is: A MYTH. This compelling film shows us that the reality of herding cattle or sheep (or whatever) is that it is a kind of prison. You can't just take off and ride west when you're looking after a flock of critters who depend on you. Sometimes you can't even get a phone signal.

Posted by Caroline Lawrence at 9:38 AM