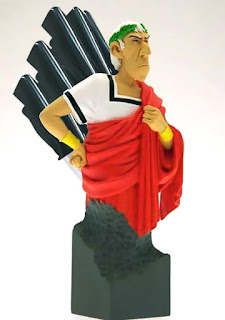 by Caroline Lawrence (author of the Roman Mysteries)

One of the first things that greeted visitors to the Life and Death in Pompeii and Herculaneum exhibition at the British Museum in the summer of 2013 was a jolly fresco of a phoenix above two peacocks (below). On the audio guide, curator Paul Roberts called this fresco a pub sign. It was found on a wall of a popina or fast food joint in Pompeii. The slogan reads Phoenix felix et tu: The Phoenix is happy (or lucky), and you!

What caught my attention was the phrase et tu which immediately called to mind Julius Caesar's last words according to Shakespeare: et tu, Brute.  Of course, as any Classicist knows, Caesar didn't really say et tu. He spoke in Greek: Kai su, teknon, which means 'and you, my child'. This is often interpreted as the poignant words of a noble, betrayed Roman to the young assassin who might have been his illegitimate child: 'Even you, my son?' 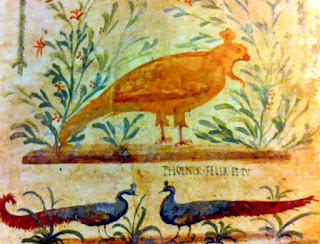 But the phoenix pub sign hints that Caesar might not have gone down quite that submissively on the Ides of March in 44 BCE.

One thing the Pompeii exhibition brought home to me was how obsessed the ancient Romans were with keeping away evil. A little research showed me that the phrase 'and you' – whether in Greek or Latin – is apotropaic.

Apotropaic is Greek for something that 'turns away'. It usually refers to anything that averts evil or bad luck. Apotropaic images include the raised palm of the left hand, erect phalluses, the unflinching gaze of a full frontal face and the eye amulets that are still so popular in the Mediterranean. Also apotropaic is the peacock, which has a tail full of 'eyes'. All these things 'turn away evil'.

The phrase et tu ('and you') has a similar meaning. It reflects back. Our modern equivalent might be 'the same to you!'. In Roman times, if a person approached you with good intentions, saying 'et tu' would be a blessing. But if they came at you with evil intent, the phrase becomes a curse. So whether Julius Caesar said et tu or kai su to the young man stabbing him, it meant the same thing: 'Back at you, punk!' or better yet: 'Up yours, Brutus!'

Check out my 30 plus history-mystery books for kids at www.carolinelawrence.com!

Posted by Caroline Lawrence at 12:11 PM