A Day at Hay

The Hay-on-Wye Literary Festival is a big event here in Britain, so I was thrilled to be invited back. 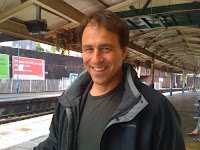 Last time I went, in 2007, I met Peter Falk after our train broke down. This time the trains are OK. I am waiting to change trains on the platform at Newport (Wales) when I see a tall, good-looking guy dressed all in black standing on the platform. It is Anthony Horowitz, mega-successful children's writer by day, writer of Foyle's War TV series by night! He just about remembers me from some World Book Day events we did two years ago and we have a nice chat about movies and plot structure. We do a little dissection of Star Trek on the train, but then I have to get off at a place called Abergevenny while he goes on to Hereford, where a driver waits to take him to a posh hotel. 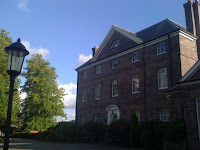 I get a taxi at Abergevenny, and it drives through the green Black Hills. Very scenic. £32 later we arrive at a beautiful stone building set among fields of green and sheep. Hey, I'm in a posh hotel, too! Peterstone Court. This is a billion times better than the B&B I stayed in last year, where the owner sneered at me because I couldn't figure out how to use the shower in the room. The staff here at Peterstone Court are lovely and I have a magnificent room with views and a big separate bathroom, almost like a suite. 'Is this mine?' I say. Apparently it is. I say a silent thank you to Orion's brilliant new publicity manager, Nina. 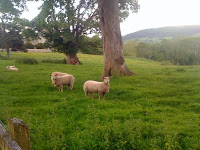 Emboldened by my luxurious surroundings, I order a Campari soda (it's 6.00pm) get a manicure in the spa downstairs, chill out in their 'relaxation room', then go outside to find a river running through woods at the bottom of the hotel's garden. It's a beautiful summer evening. Everything is brilliantly green and fresh. The brook babbles, the birds sing, sheep lift their heads to look at me. Sometimes the countryside is almost as nice as London! 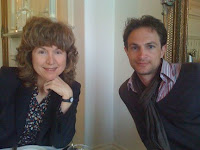 My publicity director Nina arrives later with another Orion author, Marcus Sedgwick, and we have a lovely dinner in the hotel. Marcus's book My Sword Hand is Singing has been shortlisted for a bazillion awards. Kudos. We discuss movies, vampires, vampire movies... Back up in my room I tweak my powerpoint presentation, have a bubble bath and sleep like a fluffy rock... Until birdsong wakes me at 4.30am. Ah, the countryside.

Peterstone Court Hotel has wi-fi in the library only, which is actually quite nice. It makes checking your email a kind of social experience. A quiet sense of companionship as people tap away at their keyboards in the book-lined walls on leather sofas. I have breakfast with Marcus - delicious Welsh rarebit with bacon and lashings of Worcestershire sauce, the modern equivalent of ancient Roman garum. I show him some of my powerpoint show on my laptop and he says he talks about the same things when he visits schools: mythic structure, the hero's journey, and Buffy the Vampire Slayer. 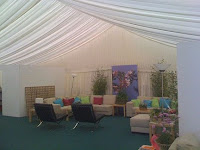 A Hay driver comes and gets Nina and me; Marcus did his event yesterday and is back off to London. It's cold and grey today, raining hard. We arrive and scamper through the rain to the Green Room. It's not green and it's not a room. It's a big white marquee, like almost all the other 'buildings' at Hay. A lovely lady called Sophie takes us through the hub of activity that is Hay's central command centre to the venue for my talk. It's a massive marquee with a lofty roof and seating for a bazillion people. Apparently Stephen Fry and David Frost can fill it but when I come out to do my talk it seems pretty empty. The rain is drumming on the roof and the wind makes the sides shudder. I have almost 400 people in my audience, but they seem a small crowd in this vast space. After my talk I sign copies of my new book, The Man from Pomegranate Street. It is literally hot off the press. I haven't even had my author's copy yet.

I sign for over an hour but then am hustled to the make-up tent to be made ready for Hay on Sky with Mariella Frostrop. I'm on the show with Anthony Horowitz and poet Roger McGough. They are both v. funny and witty. Earlier, we all chose three books we would take on holiday and are presented with copies of two of them. Anthony chooses a biography of Gordon Brown and a hot new children's book called The Ask and the Answer, because he loved the previous book. I choose Tom Holland's Millennium (in order to appear scholarly) and Myth and the Movies. Later, Anthony and I do a trade. (Not that we won't read the books we wanted) He takes Myth and the Movies and I take The Ask and the Answer. 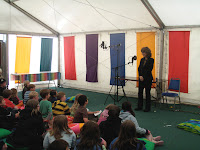 Then it's off to the Discovery Tent to try something new: a 'live audiobook'. I read a passage from The Gladiators from Capua and kids aged 6 and up provide sound effects: bloodthirsty crowd, lions roaring, water organ, trumpets... It's fun! Then a bit more book signing, then back to the Green Room for a power nap. Ain't going to happen. It's buzzing in there. My friend Robert Muchamore arrives with his entourage. He is here to promote his latest book, Eagle Day. I'm a big fan and have a ticket for his event at 4.00. He kindly promised me a lift all the way back to London. (He asked his publishers for a car to take him to and from Hay... and got it!) 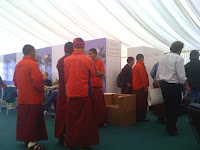 His talk is great and gets all the required laughs for his edgy vocabulary and dry humour. I know he'll be at least an hour signing books so I go back to the green room to do some literary celeb-spotting. I run into the gorgeous and witty Jasper Fford on his way to a panel talk. I wish I could go hear him but if I do I might forfeit my lift home. I see lots of guys in orange in the green room. I also offer a fellow American my umbrella, and discover she is Irma Kurtz, a famous agony aunt, promoting her book Growing Old Disgracefully.

Robert and his lovely publicity manager Sarah arrive back at the tent and pretty soon we are driving through the green Welsh hills in a BMW with cream leather upholstery and a wonderful driver named Barry with half a case of Cava each in the boot. (That's how they pay you when you do an event at Hay-on-Wye) We discuss movies, writing and David Lean, who is an old passion of Robert's and a new one of mine. A gourmet meal at Burger King - first time I've eaten there in my whole life, I think - then home, Barry!
Posted by Caroline Lawrence at 6:37 AM