Narrative techniques used by the makers of Star Trek 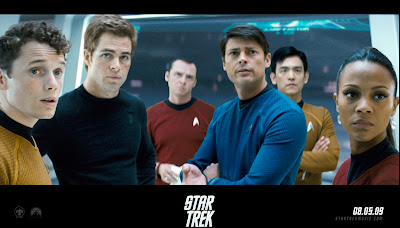 Apart from the fact that one character is called Nero and another Tiberius (kind of) the new Star Trek film really doesn’t have anything to do with ancient Rome or The Roman Mysteries. So why a blog entry about it?

Because I love thinking about the craft of storytelling and Star Trek is an example of Hollywood storytelling at its best. Here are some of the tools the screenwriters used to make it fun, exciting and emotionally satisfying.

1. RE-BOOTING - By invoking time travel, the makers of the franchise have pulled a brilliant coup. They've literally re-booted the whole series. The writers have taken the characters many of us know and love and by changing events in the future which affect the past they have given them the chance to start a whole new raft of adventures.

2. BREAKING THE RULES - In every sci-fi film ever made we all know that if you go back to the past and meet yourself, then the ENTIRE FABRIC OF THE SPACE TIME CONTINUUM will disintegrate. This film pulls a masterstroke by saying actually it's OK. This means wise old Spock can be a mentor to hot-blooded young Spock. This gives us potential for new set-ups and pay-offs we have rarely seen before.

3. RESPECTING & REFERENCING THE PAST – The original Kirk was randy and brash. The original Spock was logical and conflicted. Bones was a compassionate pessimist. Checkov had trouble pronouncing V’s. The film makers give nods to all these well-known traits of the characters we love, often in funny and clever ways. New fans won’t necessarily get the references, but old faithfuls will nod in approval.

4. HERO’S JOURNEY - The plot follows the classic steps of the Hero’s Journey, as articulated by Joseph Campbell, Christopher Vogler and others: the Hero’s World, the Call to Adventure, the Refusal of the Call, the Mentor (Pike: ‘I dare you to do better’), Crossing the Threshold, Collection of Allies, the Training, etc… However, they aren’t afraid to abbreviate steps in order to keep the pace clipping along. The Training is dealt with in two seconds by the title: THREE YEARS LATER, then jumps to a scene which shows us how brilliantly Kirk has combined skills he learned with his rebellious think-outside-the-box nature.

5. SINK OR SWIM - By taking young recruits and promoting them very quickly we get both a VERY YOUNG CREW and also the SUSPENSE that comes with characters possibly out of their depth.

6. DRAMEDY - The term ‘dramedy’ is applied by some screenwriters to a tense scene is tempered or relieved by humour. This is done brilliantly in many places in the new Star Trek film, but especially in the scene where Kirk has trouble imparting life-or-death-info because his fingers and tongue are swollen by an injection. Bones: ‘You have numb tongue?’ This scene also works brilliantly because the funny obstacle also adds suspense.

7. ARCHETYPES – the film makers use some of our favourite archetypes from myth and legend. The Hero – Kirk - who serves and sacrifices. The Mentor – Pike, who tells the hero his capabilities and calls him to adventure. The Sidekick - Bones - who supports the hero and acts as his conscience. The Trickster or Funny one – Scotty – who does the impossible. The Wild One – Spock – the ally with a wild side who often starts out by battling the Hero. He is destined to become a Sidekick, but not in this story.

8. SCENE DEEPENING – stuff going on in the background adds depth to a scene. E.g. the lugubrious alien in the Iowa bar scene between Kirk and Uhura gives a delicious and funny depth to the scene.

10. SUBTEXTS & REVEALS - Whoa! Who's Uhura dating? It's unexpected but not too unexpected. Because they did set it up and for a few scenes there was a nice little subtext. (Subtext is when a character is hiding something and we sense it on an unconscious level. This gives a nice depth to characters.)

11. KEEPING ACTION SCENES SIMPLE - Even in a highly advanced society, nothing gets the pulse pounding like fist-fights (I counted four) and cliff-hangers (at least three). They are also a lot easier to follow than complicated Transformer-esque battles, etc.

12. USE OF SYMBOLS – to name just a few:
1. THE PHOENIX - Kirk is born out of flames, like a Phoenix. Also, the escape pod is expelled from the mother ship as he is expelled from his mother.
2. THE MOTORCYCLE - Put a guy in a leather jacket and on a motorcycle and it says: Rebel without a Cause.
3. THE UNIFORM - Kirk does not put on his Starfleet uniform until the very last few scenes, by then he's earned it.
etc...

However there were at least FIVE THINGS that didn’t work.

1. OLD SPOCK - When Kirk is sent to the ice planet and just happens to meet Spock – HUGE coincidence - this should be a powerfully moving moment, but isn’t. This might have something to do with Leonard Nimoy’s mushy diction: a case of bad false teeth.

2. NERO - We are not really interested in the villain or his motives. The attempt to give him a backstory of his own doesn’t really work. Villains are very hard to get right. My favourite villain of all time is probably The Mayor, from Buffy the Vampire Slayer.

3. LINGERING NEAR A BLACK HOLE – come ON! Everyone knows when a black hole starts you have to skedaddle!

4. NO REVELATION FOR THE HERO - My mentor John Truby talks about establishing your hero’s need at the beginning. This is something in the hero that needs to change near the end, as the hero has a revelation about himself. Kirk’s need is to be less of a brash rebel and more a team player, Spock’s is to control his repressed human anger. Neither of them have a clear moment when they realise their need and then show that they’ve changed, (though there are hints). I think if these beats had been clearer the end of the story would have had more impact.

5. FLAT ENDING – the famous Star Trek monologue combined with the theme song at the very end of the film should have been a transcendent moment, but it was just kind of… flat. Why? Possibly the structure (see previous flaw)... but who knows? Will have to think about it.
Posted by Caroline Lawrence at 7:45 AM