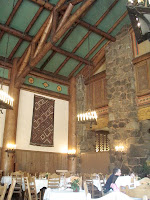 We are staying at the wonderful Ahwahnee Hotel in Yosemite, because I hope to set one of my books here.

Built in the late 1920s of stone, wood, steel and glass, it's like a wonderful country club set in the middle of some of the most stunning scenery in the world. I love primitive abstract art and this place is heaven for me. There are Turkish kelims on the walls, baskets in glass cases and Native American inspired designs on the ceilings and mantlepieces.

With its with massive open fires and a lofty dining room a hundred feet high the Ahwahnee feels like the lodge of a millionaire trapper. There are over 100 bedrooms as well as fun communal areas including secret retreats like the Mural Room. This is where I sipped hot chocolate early one frosty morning and watched the deer wander by. There are bears around here, too, and warnings everywhere not to feed them or leave even an empty potato chip packet in the car. 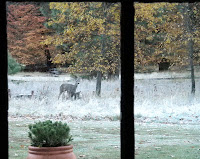 "Do you ever have bears come in here?" I ask a female member of staff who is watering the plants.

"Only in summer when the doors are open and they smell food," she replies.

"We shoo them away!" 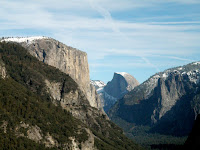 The hotel is open to the public so you don't have to stay here to enjoy the benefits. Campers and hikers drop by to thaw out in front of one of the many fireplaces or have a cocktail called "firefall" made with chocolate liqueur and chili powder. Yum. (The "firefall" cocktail is inspired by the now defunct practice of pouring coals over the top of a waterfall at Glacier Point when it was dry in the summertime. This gave an effect of a waterfall of fire, or firefall. Kids: don't try this at home)

The Ahwahnee has hosted many famous people from Queen Elizabeth to JFK. Robert Redford worked here for a while and Judy Garland sojurned here while working on a film. But most exciting to me was finding out that some of the crew of Star Trek stayed here, too! 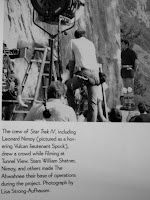 In 1988 William Shatner, Leonard Nimoy and others stayed in the Ahwahnee while filming some scenes for Star Trek V: The Final Frontier. In the opening scenes, Captain Kirk is relaxing by free-climbing the appropriately named El Capitan peak in Yosemite.

Spock: "Greetings, Captain. I do not think you realise the gravity of your situation."

This scene was mainly filmed at Tunnel View, with its vista of El Capitan, Half Dome and Bridalveil Falls. (The guide books all say it was for Star Trek IV, but trust me - a die-hard Trekkie - it's Star Trek V.)

Shatner was involved in writing the script and in this charming film clip he wonders what his subconscious was trying to tell him when he wrote the words Kirk is free-climbing El Cap in Yosemite. "This is the mecca for climbers from all over the world," muses Shatner in the film clip. "Spock asks Kirk why he's climbing this mountain. Kirk says: Because it's there... An answer that fends off the true answer... The mountain is climbed because I think the climber wants to hug the mountain... There is a passionate affair going on between the climber and the mountain."

Bill, I love you, but I think you had one too many "firefalls" at the Ahwahnee that afternoon!
Posted by Caroline Lawrence at 1:34 AM