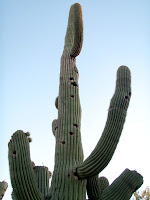 It's around noon on Sunday, October 31st, 2010. My husband, sister and I are staying at the luxurious Dude Ranch near Tucson, Arizona. But on Sundays the horses get a well-deserved rest, so we decide to take a short excursion.

We head south from White Stallion Ranch, heading for the Old Tucson Movie Studios. We pass through a beautiful desert landscape, full of dozens of species of cacti. The most impressive cactus are the iconic ones with upraised "arms", called saguaro. They give their name to this national park. Apparently a saguaro cactus does not even grow arms until it is about 75. Some of them are hundreds of years old. It's a primitive landscape, evocative of half the Western movies I've ever seen. I half expect a band of Apache to appear over the nearest ridge. We are so busy looking out for John Wayne or Clint Eastwood that we overshoot the Studios by a couple of miles.

This turns out to be serendipitous because it's lunchtime and we stop at a cafe called Coyote Pause. It's in a small strip mall which is holding a Doggie Flea Market. You can buy doggie beds, doggie cushion covers, doggie outfits and treats for dogs, etc. Dogs are in attendance, dressed in their Halloween outfits. We have salad and iced tea in a sunny annex, then head back towards the studios.

It's off season, so not too crowded. There are only thirty, maybe forty cars in the parking lot. Main Street of the western town looks strangely familiar. Outside Phoebe's Café, a tour guide called Jeff tells us why this place looks familiar: about fifty famous Western films were shot here. After Jeff's tour finishes, we watch a staged shoot-out in the street and a "bawdy theater" in the saloon. Both are good fun.

The studios close at 4.00 and we're on our way out when the mini steam train blows its whistle. It's a kiddie ride but nobody else is around so we furtively climb on. We are the only three passengers. Today is Halloween, so headless horsemen and Freddie Krugers lurk in the shrubbery. They aren't so scary under a blue sky and golden sun. Apaches would be better, but it's a great ride. 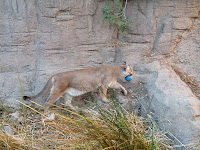 A few miles down the road from Old Tucson Studios is the Sonora Desert Museum. Late afternoon is the perfect time to go. The setting sun backlights cacti and trees. A small collection of wildlife is just waking from their siestas. We see two mountain lions, one of whom is playing with his blue ball. A black bear is still groggy from his nap and the mule deer shows us his tail. Inside the reptile house we see lots of snakes, tarantulas and other creepy crawlies. Only the Gila Monster is staying in his burrow.

On the way out a sign warns us not to feed the coyotes.
Posted by Caroline Lawrence at 1:36 PM