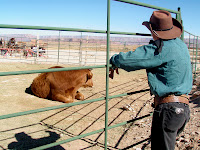 A week before we set out on our Dude Ranch Road Trip, Richard and I watched City Slickers. It's a fun film starring and co-written by Billy Chrystal about three middle-aged men who go on a cattle drive from New Mexico to Colorado and "find themselves". Sadly, it's a bit too crude in places to be a suitable family film, but there are some great lines in it.

Or, after a leather-tough cowboy dies, someone says, "The man ate bacon at every meal... You can't do that!"

Or, my favorite: "Hello boys. I thought I'd mosey on over here. You know, I've never mosied before..."

There is also a great cow in it. Halfway through the drive, Billy Crystal's character, Mitch, has to help a cow give birth. ("This was NOT in the brochure" and later: "Hey! I made a cow!") Although a puppet calf was used for the scene, the scene of a newborn getting to his feet is real. And when the newborn is cleaned up, it's the cutest calf you've ever seen. He has a caramel colored hide and big, liquid, chocolate-brown, long-lashed eyes. Billy Crystal christens him "Norman" and becomes his surrogate parent. At the climax of the film, Mitch risks his life to save Norman. He even takes the cute calf back to New York. Heck, Norman even appears in City Slickers 2!

When we visit the Skywalk at the Grand Canyon, our ticket includes a shuttle to Guano Point, which is also spectacular - and to Hualapi Ranch. You can actually stay in cabins at this ranch and go for horse rides right along the Western rim of the Grand Canyon. 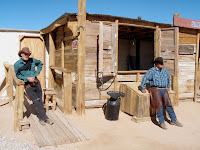 When we get to the ranch on Sunday lunchtime, it is almost deserted. Two "gunslingers" are hanging around, waiting for enough people to justify a little gunplay. I get talking to one called Steve and he tells me there was a famous movie star living here at the ranch. "Only he's retired now," says Steve.  "He's quite old, nearly 18."

"Did you ever see the film City Slickers?" asks Steve. "Do you remember Norman the steer, who's born on the cattle drive?" 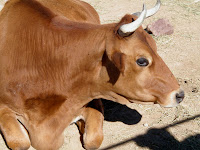 Norman! Norman the cute calf, now all grown up and still beautiful is here on Indian land!

Steve takes me to see him in his private pen. Norman is napping. He looks contented and just as beautiful in old age as he was as a calf.

If you ever get a chance to visit the Grand Canyon West Rim, be sure to mosey on by Norman's pen and say "Howdy!"
Posted by Caroline Lawrence at 6:08 PM