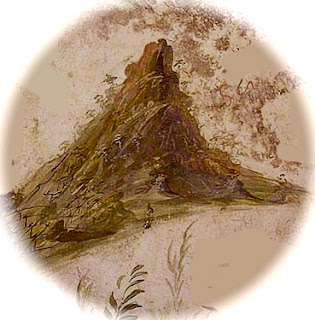 I woke up and watched my young sister Marianda sleep; peaceful and quiet, like I once did until my father died. My mother was awake and dividing the left over bread from last night's meal into three pieces.

She looked across at me and gave a half smile; I could see the tiredness in her eyes. The sleepless nights were creeping upon her and she was lost without my father - but still she smiled. Careful not to wake Marianda, I joined my mother at the small broken table. The bread had gone stale, but it was food.

I wrapped some bread in a clean bit of cloth and decided to go out and collect some firewood, when I returned it home to my mother I headed straight for the market square.

As I passed the grand houses, owned by the wealthy, I could see the desperation in the dawn callers' eyes. They would wait outside these mansions until the patrons were ready for them to enter. I was a humble man, a man with pride - like my father; I would not beg or rely on the rich.

I reached the town centre; where I set up my stall. I sold handmade jewellery, carved from wood I found near the olive groves.

It wasn't a busy day but I had made just enough money to buy a loaf of bread from the bakers. I made my way along the street: via dell' Abondanza and turned down the dark alleyway until I reached the small building where my mother, sister and I lived.

I entered the cold room and found Marianda and my mother sitting at the table, sewing a blanket with left over material from some curtains they had made earlier. I placed the bread on the table, found a knife and cut it carefully. This bread was to last us until the following night at least.

After we had eaten, we climbed into our small beds and slept.

Once I had woken, I ate a small portion of bread and made my way to the stalls. As I passed the morning streets of Pompeii I felt a minute shake in the ground. I stopped for a moment and looked at the ground to see if there were any cracks until I was forced to move on by a fierce man crashing into the back of me.

I had made the same amount of money as the day before, but deciding whether to buy cheese or bread wasn't the first thing on my mind. The possibilities of why the earth shook lingered around my brain.

I arrived home and found my sister, Marianda, playing underneath the yellow, evening sky; I beckoned her to come inside the house so that we could eat.

I placed the food on the table and served our evening rations. Whilst mother and Marianda ate their dinner, I nibbled on small scraps. I was curious as to why the earth was shaking so much, and what was to come.

As my mother and sister were sleeping, I crept outside and found a large flat stone that I could write on. I decided to write down my observations, whilst sitting under the snow white moon light. The air was bitterly cold.

Once I had recorded my thoughts and observations, I snaked my way back into the house. I once again climbed into my bed and slept for a few moments until I was awakened by a loud roar and stagger of the ground.

The pots smashed on the stone floor and the surface of the rotten table soared to the ground and split through the middle. I hurried my sister and mother down the cool stairs and out onto the street, where many others gathered. Few bricks crumbled and pots and pans smashed, but there was no severe damage done to the long row of houses.

Once the growling of the earth had stopped, my family along with many others made our way back into the evacuated houses. Many were full of relief and few overpowered by curiosity.

For the next two hours we dreamt hesitantly, tossing and turning, until finally the morning sun glistened in the horizon. We gathered around the table and ate our breakfast.

Following my usual routine, I made my way to the town centre. I noted that there were less tourists gathered in the streets than ever before so I decided to ask the fairly old lady who owned the store next to me for answers.

Her reply was unclear, but there was some sort of fear in her voice as she spoke. She mentioned the previous earthquakes, but she didn't give me a direct answer or solution. Fewer tourists meant less money as far as I was concerned, and it certainly proved when I set out to purchase my usual loaf of bread from the bakers.

I was welcomed back by my mother's voice and yet another shake of the earth. My sister crouched in the dingy corner of the room, playing with some beads. I slumped down beside her and enjoyed some moments of silence with her.

I could not afford much bread to the lack of customers, so we had even smaller portions than usual. I preserved some bread for the next morning and instead filled myself up on water. We all sat in near silence underneath the light of the moon that peered through the window, and watched the small candle light flicker until it was time to sleep.

I dreamt about a volcano, and the horror that came with it. I pictured its mouth spray out lava and black smoke. I could almost feel the intense heat and I could almost hear the sharp rocks smash to the ground until...

We were again awakened by a jolt in the earth and we evacuated the building. The growling was louder and more deafening and the movement was more extreme.

Just as the rim of the golden sun touched the edge of the horizon, a large black cloud emerged and hovered in the sky. It came from the mouth of the volcano. As the minutes passed it grew larger and deeper in colour. It covered almost all of the once orange morning sky.

All of the town gathered in the streets and gazed up at the giant that hung above us. It looked like a layer of soot and ash had coated the sky. The whole population of Pompeii was dominated by fear and overcome with confusion.

I saw my sister, Marianda curled up on a large rock, I walked over to her and tried to reassure her but no matter what I said or what I did, I knew that she was old enough to understand that not every story has a fairy tale ending.

My mother was nearby so I went to comfort her but no words could escape from between my lips. Everyone in the city knew what was about to come.

A hail of ash rained down and painted the city the same colour as the sky. That hail soon turned into a blizzard and I could hear the whimpers of children, women and men echoing and bouncing from each piece of black pumice. I carried my sister over to my mother and we held one and other tight.

Grey was the only colour I could see, both the sky and land was covered in it.

The deafening screams and cries soon faded as the air became thinner and thinner. Blackened rock and molten lava rained down upon the city. I grasped my family, the two most important people in my life tighter and held them close to my chest. I would not let go.

My shirt was wet with sweat and tears. Their silent cries echoed around my ears. The whole town was now black and disguised by the layer of debris and rock. I felt them slip away from my grasp as I went into a deep sleep which I could not fight.

The blackness slowly turned into a bright white light, I felt my soul escape from my body. As I floated upwards I watched Pompeii, the once lively city full of tourists fade beneath my feet. I did not feel anything or hear anything or after a while see anything, but when I reached the climax I saw a ghostly figure walk towards me. It grew from a small speck, into a blur, into a man, and then finally into my father.

I walked to him and reached out to hold him; he moved closer to me. We held each other for what felt like an eternity until we finally let go and walked down a long, white path.

My mother and sister's souls - I still cannot find them, but I know that they are somewhere between heaven and earth and I will not rest in peace until I find those who were and still are closest to me.