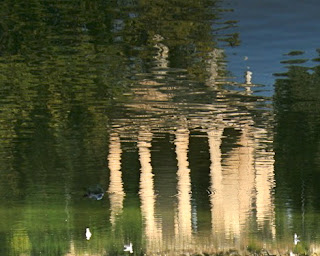 It's been many days since I last saw you, that brisk morning just before you left for Pompeii. Since you left, I have done little except wander the Gardens of Lucullus in search of the source of my torture. I was shocked when I realised that Rome was dying. I often feel as if I have given birth to this city and its ever growing decadence worries me greatly, to the point where sleep eludes my stretched mind. I returned each day to the same garden, my nightmare has become an obsession. Even now, no matter how hard I think the solution remains hidden, basking in the shadow, taking some sadistic pleasure out of my suffering. On each return I leave fresh markers that I hope, in the full glare of my hopelessness, will have blossomed into inspiration and give this drowning city the rescue it deserves.

Perhaps I should describe to you the vision which burns my eyelids whenever they shut. I see from the eyes of a bird, a Wren I believe. In my beak I carry a sprig of Laurel which dances and pirouettes with each silent, rhythmic stroke of my wings. I fly, with grace and beauty like no other straight into the senate house – might I add that the detail of inside is exquisite as if this could all be real! I see a few men, who all face away until I tear the sprig of Laurel into shreds and let each torn piece rain upon the crowd gathered below. The look of absolute horror is strangely amusing, that is until I see a pale face amongst the chaotic screams of terror. The man looked as if something inside of him had died or was dying or was so ill that what little hope of survival had been sacrificed. It was only when I once again went to the Garden of Lucullus and saw in the crystal water of the central pond that same pale face. I had finally realised that man was me.

It was only yesterday that I revealed to Spurinna that the nightmare had so badly affected my mind and his reaction, my Calpurnia, is what drove me to record my activities and musings so that the truth could be told to you In the most direct and sincere way. Tomorrow I am to sacrifice to the gods and hope that in return for my loyalty, I receive favourable omens. Without them, I am sure to last only a few more days. As I write this down, rain pours from heavens and drowns any hope I might have of seeing you again. The moon crests a junction between two clouds and cast the shadow of our home across the street. It feels as though the divines sign their name in untidy handwriting, condemning my soul to an eternal void.

The flickering of my torch at night has kept me lucid and as before I will sit before its soft glow in despair, as I feel I will never understand how to keep Rome afloat. I have found myself to be as featureless as the ocean, as shallow and unoccupied as a far off bay, my mind a listless wreck with no hope of salvation. I drift in and out of my nightmare and let the unintelligible whispers of the night carry me off. Where? I cannot possibly say... But what can be said is that if Rome could see the state of its leader then all hope would be lost.

A moments peace was once what I dreaded but now I warmly invite it to sit with me just a little longer. Today I revealed to the fellow senators and to the people of Rome that I had an idea. Finally, the idea I had searched for, the ambition I needed to give my emaciated mind a fresh burst of life had sprang forth from the most unlikely place. During my wanderings in the Garden of Lucullus I began to notice a small flower bed so densely populated by small purple and white daisies that the thick canopy obscured the ground itself. The little flowers began to lose their beauty, their lives folded over by the sheer weight of so many others.

When I observed my favourite patch today something was different. When the rain came last night a large purple flower had erupted forth and taken what was so densely populated and toppled the balance. It seemed that the gods willed and permitted such a capitalisation and it was then that I realised the solution lay not with well-crafted words or futile alliances but with the willingness to take what is rightfully yours. Once again the solution lies along the path of war but it is not without justification I equip both my mind and body with sharp, glistening tools. The tools of a master craftsman.

All this happened before the sacrifice and left me with some sublime elation. This stupid vulnerability, a crease in the fabric of my mind revealed too much to the senators I was now conspiring against. Why is ambition so becalmed? It beckons me to walk on its path yet I know that it will shatter under my feet and drag me under like a rough sea that thrashes an unwitting ship and shrouds it in its salty cloak before ripping it from the surface and hiding it within its bowels.

When I was told by Spurinna that my life would not extend beyond the Ides of March my greatest fears had been realised. I had hoped that I would be able to see you again and discuss the content of these letters in a comical tone, but the harsh readings of a corpse on a slab has opened up a premature death for me and like a boat without a bottom my heart sinks lower and lower. The realisation that I will never see you again has caused my mind to spiral deeper into my own nightmare and obsess about the power I need to save my dying city.

When Spurinna told me such things, I could do nothing but laugh. It appeared to the others as a laugh of disbelief but really, I laughed out of despair and delirium as I regarded my failure to protect the true nature of my ambition. I have seen the way Marcus Junius Brutus talks about me with Gaius Cassius Longinus and a handful of other senators. I heard the word 'Liberatores' being used but I don't yet understand its meaning or gratuity. I am left with only two true friends; Marcus and you. Assuming of course that you still love me despite the nightmares, despite me waking to false dawns only to find the landscape distorted by the steady trickle of tears. I am safe knowing that no matter where I am, your reaching is always upon me.

I am now truly hated by my fellow senators. They all know I want rid of them and I'm sure they want rid of me. All I wanted was to unite the great nation of Rome and heal its sickness. Why has my own mind betrayed me? I sit here in front of my dimming lamp attempting to trace the lines of my ambition back to my shattered heart. The soft, melancholy glow of the full moon illuminates the ink that soaks through the fibres, the pulp of vegetation that holds the bulging enigma of my final three days.
My betrayal is inevitable and with only Marcus to watch my back I have little hope of survival.

Tomorrow I take a leap of faith, a plunge into the darkening abyss where I will meet the gods and ask them why they place such a curse upon me. This curse, this inability to drive out the terrors which haunt every dream and lurk behind every corner and every closed door in my mind has incapacitated me and left me ripe for the picking. The 'Liberatores' bear down on, the sharp blade of Brutus is what I fear will strike the final blow.

He was a man I thought was my friend has ruined my life. Rome will surely die without the idea the gods sent me. I must speak with Marcus before I am sent away and I must unveil to him what has torn my soul in two so that he can pursue my goals without his own mind collapsing like mine has. I have little time to waste as the night creeps on and my shoulders itch with the nascency of flight. It is certain that I will never see you again unless the heavens hold the promise of the preacher and there is indeed, a place where you and I can rest at long last.

I have drunk deep from the fountain of life until my body cannot take another drop of the poison. I leave you my heart, etched onto these pages as a series of black lines drawn from the depth of my suffering. As I take flight you become a nest to me, somewhere I might rest in your comforting presence whilst I watch Marcus use my idea and wield it like a true warrior. None will dare block his path, except Brutus of course but he will be carved from his throne and cast into the pages of history as a murderer and a fiend. From the idea that infected me springs hope, from my grief comes love for you and from my ambition only the painful end of a knife.

I have learned all too well that ambition can take one to sublime heights or harrowing depths and often they are one in the same. Vale uxor mea!

In this impressive short story in the form of three letters, 15 year old Adam Stanley imagines what thoughts might have filled the mind of Gaius Julius Caesar during his last three days on earth. Adam is from Cheadle Hulme School and this story took third place in the 2012 Golden Sponge-stick Writing Competition.
Posted by Caroline Lawrence at 8:51 AM