Yee-haw! Another ripsnorting weekend at the Santa Clarita Cowboy Festival!

Even before the weekend started we took a Tour of Santa Clarita Valley film studios and sights on Thursday 28 April and on Friday evening we attended the Melody Ranch Movie Night, a fun open-air dinner on main street of a western town, followed by a screening of the film "Stagecoach". 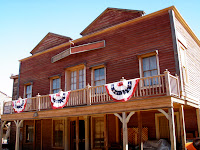 My highlights of the weekend proper were the Behind the Scenes Tour of Melody Ranch. We found out where Al Swearengen drank his coffee, where Wu kept his pigs and lots of other fascinating facts about the history of the site.

A new event sponsored by Buckaroo Book Shop (AKA OutWest) were some literary panels. I especially loved the discussion of True Grit, comparing the two films to the book. It was chaired by C. Courtney Joyner who told us things I never knew, e.g. that Charles Portis himself wrote the alternate ending for the John Wayne version of the film!

I was there with my husband Richard and sister Jennifer. We heard some of our favorite musicans, like the Brass Band of California who are always lively, funny and accurate. (I got some tips about 1860s Music Hall traditions.) We also managed to catch Wylie and the Wild West and the Hot Club of Cowtown. I missed Sourdough Slim and his saw-playing sidekick, but Richard and Jennifer loved them.

It was great to meet re-enactors like the Buffalo Soldiers and Ann Dinsdale, (above), who was spinning and weaving on the porch next to Sheriff Bullock's house.

The merchandise was another highlight, too. I was tempted by a coyote pelt, but ended up buying a beautiful carpetbag from Jerry Tarantino. I can use it to carry my spittoon to school events and literary festivals when I promote my Western Mysteries in costume.

Food'n'drink were great, too. There's nothing like drinking coffee from a tin mug and eating peach cobbler while listening to Don Edwards over on the Main Stage.

It was great to meet some old friends and also to make new ones. I've never been anywhere as friendly and fun as the Cowboy Festival. Here Here are some pictures to give you an idea of the fun we had! Yee-haw!
But everybody had a great time. Can't wait till 2012... Yee-haw!
Posted by Caroline Lawrence at 3:47 PM